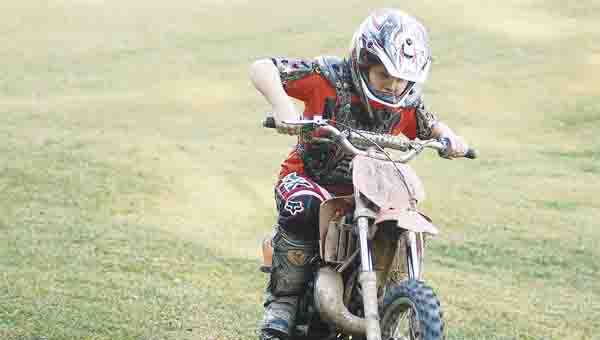 CHESAPEAKE — The bike’s motor revs up as Tristin Fry starts the vehicle. The focus and determination is in his eyes. He is ready to ride.

Fry, an 8-year-old from Chesapeake, participates in extreme dirt bike racing. He has won 12 straight races in his class. Extreme dirt biking is done on a pre-marked track through the woods.

In the Pee Wee division, the track is two or three miles and the racers get 30 minutes to complete the race.

Competitors have a barcode on their helmet that organizers scan to keep track of their time. Sweepers, volunteers on ATVs who supervise, make sure the racers are safe.

There are two different titles to win: best in class and best overall in the race.

During this stint, Tristin has won seven overall race titles and five best in class. His room gleams with all the medals and trophies he has won in his three-year racing span.

Plaques with his place and number he placed line one of the walls.

This past summer at a race in Belpre Tristin decided to compete in the youth class with a bigger bike, longer track requirement and 45 minutes time frame. He hit an obstacle during this rainy day.

Tristin said he raced down a hill with mud puddle in the middle. Due to the slick conditions, he got stuck in the puddle.

“He said the water was waist deep,” his father, Danny Fry, said. “But he got out of the hole and finished the race. Seven kids didn’t even finish.”

Tristin got involved in racing thanks to his uncle. His uncle had an unused all-terrain vehicle and gave it to Tristin for Christmas when he was 5 years old. He rode the four-wheeler without a helmet the first time out and rolled it over. He was not injured.

Despite the mishap, the family decided to continue to let him ride. They went to a race of 5 year olds racing on mini-ATVs. Tristan won the race. He raced four different races on the four-wheeler.

Nerves ran high during the beginning of his racing tenure.

“The first few races I was very nervous,” his mother, Rhonda Fry, said. “Now I have total confidence in him. He uses good judgment.”

Could go before judge next month A motion by the city of Ironton to end the civil rights lawsuit filed... read more