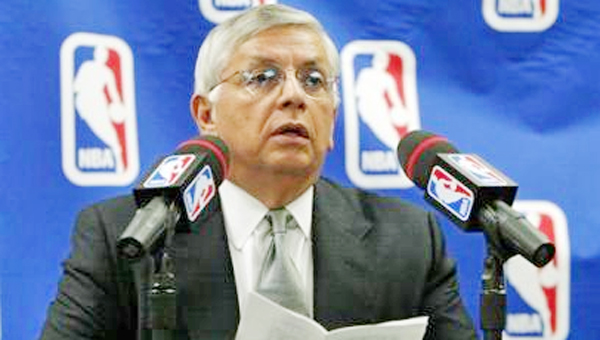 NBA commissioner David Stern announced Monday that he had canceled the first two weeks of the NBA regular season due to the stalemate in the labor negotiations.

NEW YORK — NBA Commissioner David Stern canceled the first two weeks of the season Monday after players and owners were unable to reach a new labor deal to end the lockout and warned that there may further cuts in the schedule.

“With every day that goes by, I think we need to look at further reductions in what’s left of the season,” Stern said.

The cancellations mark the NBA’s first work stoppage since the 1998-99 season was reduced to 50 games.

“The gap is so significant that we just can’t bridge it at this time,” Stern said. “We certainly hoped it would never come to this.”

“This is not where we choose to be,” he said. “We’re not at a place where a fair deal can be reached with the NBA.”

With just three weeks remaining before the start of the season, top negotiators for both sides met for more than seven hours Monday but were unable to reach an agreement. The two sides expect to remain in contact, but no additional formal talks have been scheduled.

Stern said both sides are “very far apart on virtually all issues. … We just have a gulf that separates us.”

Opening night was scheduled for Nov. 1, and the cancellation includes all games scheduled to be played through Nov. 14 — exactly 100 games. Affected arenas have been authorized to release dates for those dates.

With another work stoppage, the NBA risks alienating a fan base that sent the league’s revenues and TV ratings soaring during the 2010-11 season. And the cost of cancellations would be staggering.

Deputy Commissioner Adam Silver said the league would lose hundreds of millions of dollars, while union executive director Billy Hunter estimated players’ losses at $350 million for each month they were locked out.

Now ushers, security personnel, parking lot attendants, concession workers, restaurant employees and others all stand to have their hours cut or join the country’s 14 million unemployed. A few teams also have either trimmed their staffs or instituted sharp pay cuts — some did that as the lockout began — and more layoffs could be forthcoming.

Hunter said he didn’t think the full season was in jeopardy yet and stressed it would be a mistake for the NBA to risk it coming off a season when revenues and TV ratings soared.

“I think it would be foolish for them to kill the season, and we’re coming off the best season in the history of the NBA and I’m not so sure in this kind of economy that if there is a protracted lockout whether the league will recover,” he said. “It took us a while to recover from the ’98 lockout, and I think it will take us even longer to recover this time around.”

For the second straight day the sides focused on salary cap system issues instead of the division of revenue split.

Both sides stressed it was the system issues, not the revenue split, that turned out to be the larger obstacle Monday.

Stern said he felt the league had made serious concessions on the system — withdrawing its demands for non-guaranteed contracts and what they considered a hard salary cap. Players, however, insisted the league’s idea of strengthening the luxury tax would have acted as hard cap, scaring too many teams from spending above the cap level.

Players reacted quickly — and in some cases, strongly — on Twitter within minutes of the cancelations being announced.

Miami guard Dwyane Wade said the situation “just got real” after he learned the first two weeks are now gone, then lashed out at Stern’s comments in a second post by saying they hurt employees at arenas around the league, other businesses that thrive off NBA business and the league’s fans in general. Minnesota rookie-to-be Derrick Williams, the No. 2 pick in this year’s draft, tweeted that going overseas may now be an option for him.

The success of last season, on the court, at the box office and in the headlines, convinced many that the sides would never reach this stalemate.

But small-market owners were hardened after watching LeBron James leave Cleveland for Miami, Amare Stoudemire bolt Phoenix for New York, and Carmelo Anthony later use his impending free agency as leverage to secure a trade from Denver to the Knicks. They wanted changes that would allow them to hold onto their superstars and compete for titles with the big-spending teams from Los Angeles, Boston and Dallas who have gobbled up the last four championships.

As the lockout drags on, Stern’s legacy as one of sports’ best commissioners is weakened. He turned 69 last month, and although he hasn’t said when he will retire, he did say this will be his last CBA negotiation after nearly 28 years running the league.

He has insisted all along he wouldn’t worry about the damage to his reputation and that his only concern would be getting the deal his owners need.

It’s uncertain when that will be. The sides didn’t agree until Jan. 6 in 1999, just before the deadline for canceling that entire season. The league ended up with a 50-game schedule, often plagued by poor play as teams were forced to fit too many games into too small of a window.

They could keep meeting now and agree to a deal much sooner this time. Or perhaps the divide is still too great and they will decide there’s no reason to rush back to the table.

Though both sides have said they believe bargaining is the only route to a deal, the process could end up in the courts. Each brought an unfair labor practice charge against the other with the National Labor Relations Board, and the league also filed a federal lawsuit against the union attempting to block it from decertifying.

Union officials thus far have been opposed to decertification, a route the NFL players initially chose during their lockout. But Hunter has said it might eventually be considered.

Players say they have prepared for a shortened season for a couple of years, knowing it could be the inevitable outcome of a difficult negotiation. The owners’ initial proposal in early 2010 for a new CBA, calling for salary reductions and rollbacks, shorter contracts and a hard cap of $45 million, got the process off to a tense start.

When the sides couldn’t agree to a new deal before the old one expired on July 1, Hunter said it had been difficult for the players to overcome the setback the initial proposal caused.