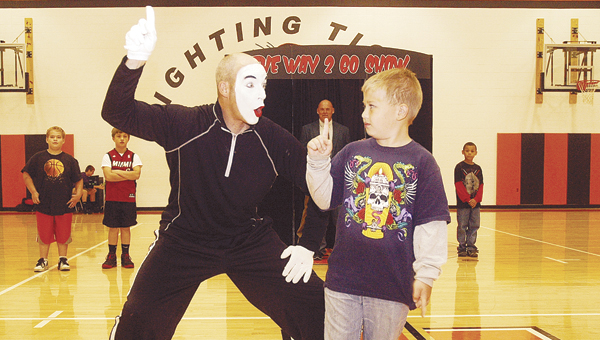 Setting up his characters for a mime time baseball game Mark Abbati works with a student from Ironton Middle School to get him to mime selling peanuts and popcorn Wednesday.

As the old adage goes, actions do speak louder than words.

He performed a show for kindergarten through second grade at 10 a.m. followed by a longer performance for third through fifth grade at 10:30 a.m.

Abbati started simple. He arrived at the gymnasium without his performance make up on.

“I came in and established a rapport with them,” he said. “Then I asked (the kids) if they had makeup on before. Most of them have. Did they feel the same person even with the make up on? Yes. Therefore I must be the same as they are.”

“He showed the kids how to put on the make up and that he’s pretending and not frightening,” Kim Brown, school principal said.

The main themes in Abbati’s performance were caring, sharing and tolerance. Many of the skits also featured a character that had a chance to make a choice.

Sometimes the character made a bad choice such as one bully breaking another child’s balloon. But then the characters had a chance to redeem themselves. In this case the bully gave the other child another balloon.

“Caring and sharing are excellent lessons to teach the youth of our community,” Dean Nance, superintendent of Ironton City Schools, said.

During the second show, Abbati played a pitcher angry with an umpire’s, played by Nance, play call. He pretended to kick dirt on the umpire’s shoes and was ejected from the game. At the end of the performance he said he shouldn’t have been arguing and arguing gets nowhere.

Abbati stressed the importance of youth involvement in the arts.

“I think it’s very important,” he said. “Some students learn visually and some are auditory. It makes concepts easier to understand. For example, I loved show and tell as a kid. Mostly the showing rather than the telling.”