Hobbled Miller will start but backup Guiton may play 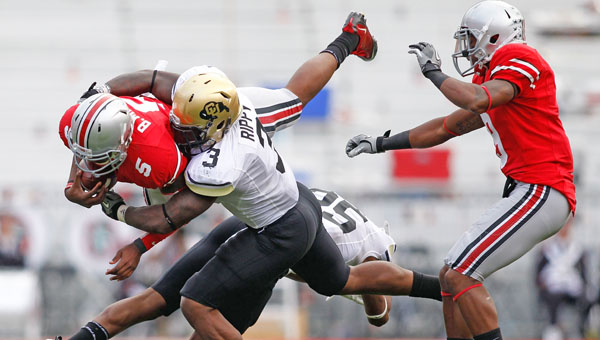 COLUMBUS (AP) — For a change, Ohio State’s quarterback controversy isn’t who will start.

Braxton Miller is healthy enough to take the first snap when the Buckeyes travel to play at No. 16 Illinois on Saturday.

Interim coach Luke Fickell said that Miller has been working out with the team and doing everything he needed to do to show he’s fully recovered from a sprained right ankle sustained in last week’s 34-27 loss at Nebraska.

“He’s done a great job,” Fickell said Thursday. “He’s moved around. He hasn’t let it hamper him, hasn’t let it affect him emotionally. I think that’s the most important thing.”

That doesn’t mean that Miller is 100 percent. Fickell concedes the true freshman is still probably sore.

“Whether it hurts or not he hasn’t shown a whole lot of that,” he said. “I’m sure it hurts a little bit, just like everybody on the team has got a little bit of something (hurting) in the seventh week of the season. But he’s done a great job of battling and continuing to get better through the week.”

The Buckeyes staff must balance Miller’s physical pain with his growing pains.

“He’s had a good couple of days of practice,” quarterbacks coach Nick Siciliano said Wednesday. “He’s starting to grasp what we’re doing. He’s going to get better as time goes on. He’s going through some growing pains with everybody right now.”

Perhaps a bigger question for the Buckeyes right now is who is backing up Miller.

Joe Bauserman was just 1 for 10 passing with an interception last week. Kenny Guiton received more snaps during this week’s practices and Fickell said he may see his first time at quarterback this season if needed in relief of Miller.

Miller, Bauserman and Guiton, along with Taylor Graham, were in a four-player battle for the quarterback spot throughout the spring and summer workouts. Two weeks into preseason practice in August, Miller and Bauserman became the top two. Bauserman started the first three games but Miller has started the last three.

The Buckeyes were ahead by two touchdowns at Nebraska when Miller was injured. After that, however, the offense under Bauserman struggled to move the ball while the defense was gashed for huge yardage.

“The momentum swing was big,” center Mike Brewster said. “It just seemed like after Braxton went down we really just couldn’t get anything going.”

Players said earlier in the week he favored the injured ankle, taking it easy whenever he had to pivot or turn a corner.

But Fickell said he was full go and running full speed on all plays in the latest practice.

Holliday sees lots of similarities between Marshall and Rice