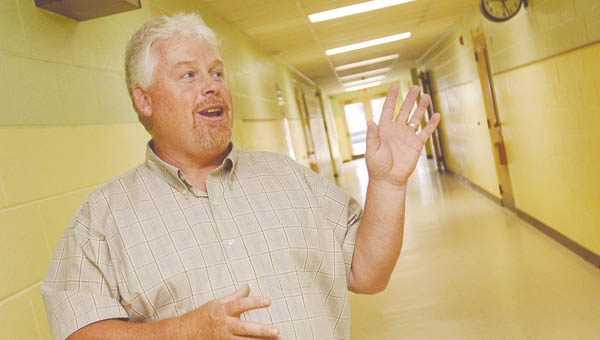 Joe Freeman, new owner of the former South Point Elementary School, talks about his plans for the building.

SOUTH POINT — A local businessman’s plans to convert the former South Point Elementary School into professional offices has been put on hold, for now, due to resident opposition.

Health Management Nursing Services CEO Joe Freeman said the company will instead begin its overhaul of the building by converting a large wing of it into four two-bedroom condominiums for senior citizens.

The company bought the former school earlier this year from the South Point Board of Education for $395,000 and plans to spend approximately $1 million on renovations to the property, currently valued at more than $1.4 million.

Freeman said he would still like to convert part of it to professional office suites — eventually moving his business offices there — but cannot do so unless he wins approval from adjacent property owners.

Under the Village of South Point’s zoning ordinance, Freeman must get signatures from 60 percent of adjacent property owners to house professional and medical offices at the building, which is located at 501 Washington St. in a residential neighborhood. Freeman said he needs 10 signatures to secure the variance.

So far he has nine.

The remaining property owners have refused to sign the petition and a group of residents has begun campaigning against the project.

Last week, nearly a dozen residents attended a council meeting to voice their concerns about the project. They also pressed officials for ways to stop Freeman from converting the building into office spaces. Village Administrator Pat Leighty told residents there is nothing the village can do to stop the renovation work but that it can prevent occupancy for a use that is not allowed under the ordinance.

Many residents, all of whom refused to give their names after the meeting, said they are concerned the commercial project will adversely affect their residential property values.

They implored the council to update its zoning ordinances to remove language that allows a range of other businesses to be located in residential areas without a variance including hotels and boarding houses, hospitals and nursing homes, and government offices.

South Point council members voted unanimously to schedule a work session to take a look at the ordinance, with the intention of changing it but ,as of Friday, had not set a date for a meeting.

But Mayor Ron West and Freeman have both said they are certain any changes to the ordinance would come too late to affect what Freeman could do with his property.

West and Leighty both said they have tried to remain neutral in the dispute.

Both agreed, however, that the zoning ordinance needs updating.

The ordinance was last amended in the mid-90s when provisions barring adult entertainment establishments were barred — but the heart of the legislation was adapted in the mid 80s and contains out of date terminology.

Freeman said he has been shocked by residents’ opposition.

“I didn’t think I would have so much push back from the community when you go to create jobs,” he said, adding he had been talking to a number of out-of-town businesses who were interested in moving their offices to the building including an accounting firm and an engineering firm.

Shortly after purchasing the property in July, Freeman wrote a letter to residents of the surrounding neighborhood introducing himself and announcing his plans. He also invited them to attend a company picnic.

“It is our intention to provide jobs and services in consideration of the local residents,” Freeman wrote in the letter. He stated that a majority of employees would work between 8 a.m. and 8 p.m. and that in the future he hoped to “bring in a road from The Point into the rear of the property so we can be even less invasive to you.”

A new road could also serve the Tri-State Bible College, according to Bill Dingus, director of the Lawrence Economic Development Corp.

“I had always felt that we needed to build a road in from Collins Avenue to over there, and let them become much more of a part of the business community rather than residential,” Dingus said, adding it could be designed so that traffic on the new road would not get into the neighborhoods from it.

For now, however, it remains on the drawing board.

“It never got to the planning stage,” said Dingus, “The only way that road could be built is if we were creating jobs.”

Ironton’s Trevor White (45) prepares to fight off a Hartley defender as he runs for yardage in the first quarter... read more