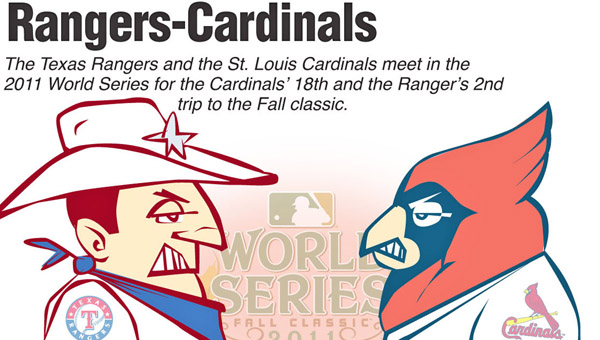 It’s a World Series straight out of Central casting.

David Freese, the local boy who became a big hit for the St. Louis Cardinals. Big Tex himself, Nolan Ryan rooting on the Rangers. A pair of teams cut from a center slice of the country, set to meet in the middle.

Makes for a different feel this October, doesn’t it?

No coasting in this Series. None of the Derek Jeters, Dustin Pedroias or Chase Utleys from the East we’ve grown accustomed to seeing. None of the Tim Lincecums or Brian Wilsons we watched from the West last fall.

They begin at Busch Stadium on Wednesday night, with C.J. Wilson starting for Texas against Chris Carpenter.

Oh, and no need to change any clocks. Every game is scheduled to start at 7:05 p.m. local time. Kind of nice to avoid those late-afternoon shadows in California and skip those post-midnight final outs in Northeast. Provided there’s no rain or extra innings, that is.

With MVPs Albert Pujols, Josh Hamilton and several other All-Stars involved, it’s certainly an interesting matchup. Adding to the intrigue: The teams are hardly acquainted, having played only three games against each other — and that lone series was back in 2004.

According to STATS LLC, the Rangers-Cardinals matchup equals the fewest games between two opponents in the majors, tying Mets-White Sox.

Freese was eager to get going. A prep star in suburban St. Louis, he emerged as the MVP of the NL championship series, helped by his three-run homer in the clinching Game 6 at Milwaukee.

“Thanks for the love yall,” Freese tweeted Monday. “For the first time gettin smoked in fantasy football doesnt feel too bad.”

Whether sports fans in other spots will watch this Series remains to be seen.

Last year’s pairing of the Giants and Rangers drew television ratings that equaled the lowest ever. The numbers were down 28 percent from the year before when the New York Yankees played the Philadelphia Phillies.

The Cardinals still have a national profile, dating to a half-century ago when St. Louis was the most western point in the major leagues. In those days, the vast Cardinals radio network developed a broad fan base all over the country.

This week, the Rangers make their first trip to St. Louis.

“I think we’re a team that can match up with them a little bit. And they’re confident, we’re confident. It’s been a tough road. I’ve definitely been watching the ALCS for sure. That’s some good ball over there,” he said.

Manager Tony La Russa and the wild-card Cardinals make for a good story. Trailing by 10 1/2 games in late August, St. Louis made a late run and earned its playoff spot on the final day of the regular season.

The Rangers, guided by excitable manager Ron Washington, were in control for most of the season. Both teams can score, and both wound up relying heavily on their bullpens in the playoffs.

They also share this similarity: Neither had a payroll in the majors’ top third on opening day. The Cardinals were 11th at $105 million, Texas was 13th at $92 million.

Not exactly a matchup that anyone predicted in spring training, at the All-Star break or in the stretch.

“This is a year where if you know anything about baseball,” TBS analyst John Smoltz said, “throw it out the window.”