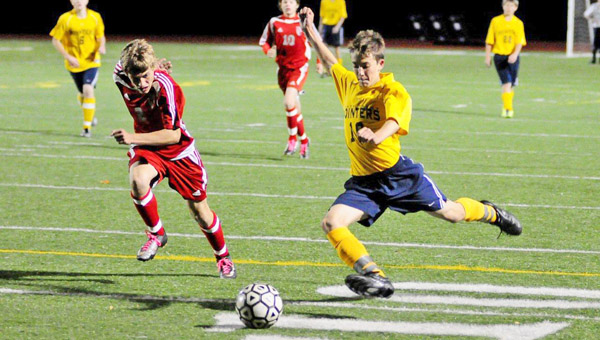 South Point’s Liam Huff, right, scores one of his three goals in a 4-1 win over Piketon in the Division III sectional tournament on Monday. (The Ironton Tribune / Kent Sanborn of Southern Ohio Sports Photos)

Huff scored at the 35-minute mark off an assist by Erin Dillow to give the Pointers a 1-0 lead.

Huff scored an unassisted goal two minutes later and it was 2-0.

The Pointers went up 3-0 early in the second half as Mario Palladino scored with the aid of a Brady Sloan assist.

South Point closed out the scoring and sealed the victory when Huff scored at the 73-minute mark with Michael Lien handing out the assist.

South Point (8-6-3) plays in the sectional finals at 5 p.m. Wednesday at Minford.