Bengals decide to move on by trading Palmer to Raiders 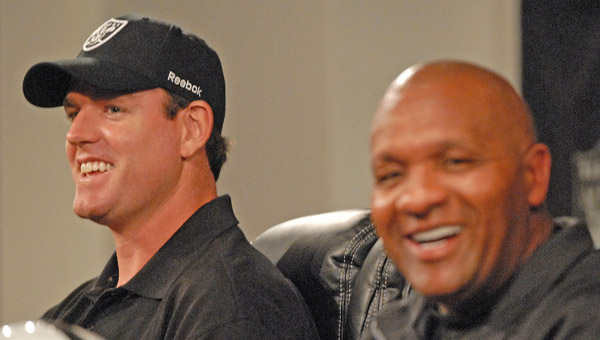 CINCINNATI (AP) — By trading their franchise quarterback, the Cincinnati Bengals can finally move on.

The Bengals ended nine months of uncertainty Tuesday when they dealt Carson Palmer to Oakland for a pair of draft picks. Palmer told the Bengals in January that he wouldn’t play for them again and he wanted a trade, something that owner Mike Brown had adamantly refused.

Shortly before the trading deadline, Brown did an about-face and traded Palmer for first-round and second-round picks, a better deal than they’d expected for the 31-year-old quarterback. Coach Marvin Lewis indicated he would have preferred trading Palmer earlier, but Brown wasn’t ready until the Raiders’ offer came along.

“My boss is a very patient man,” Lewis said. “Don’t want to play poker with him, do you?”

The Bengals can move ahead without having to account for Palmer in the budget. They had to set aside money to account for his salary should he change his mind and show up to play. Palmer had a base salary of $11.5 million this season, with three more years left on his deal.

Instead of saving budget space, the Bengals can try to extend deals with other current players.

“Now we open up some other doors,” Lewis said. “There has been a lot written about, oh, you guys have this much (salary) cap space, but we had to have that space stay in there because if Carson were to walk in here, we had to be able to handle that.”

The deal had little impact on his former teammates, who knew he wasn’t coming back when he told the team in January that he would retire rather than play another season in Cincinnati. The Bengals have only two winning records in the last 20 years.

The message board by the entrance to the Bengals’ locker room Tuesday had an anonymous scrawled message: “Let My People Goooooo!” Otherwise, there wasn’t much reaction.

“I don’t think even one player in this locker room’s even thought about that,” left tackle Andrew Whitworth said.

“We haven’t worried about it. We’ve gone forward with the guys we have and tried to play as good as we can and that’s all we can do.”

Palmer’s former teammates were glad that he finally received his wish. Palmer was the first overall pick in 2003 and led Cincinnati to those two winning seasons, only to have his career interrupted by knee and elbow injuries.

“Kudos to Carson,” offensive lineman Bobbie Williams said. “Just good luck to everybody. I don’t know about the details, but whatever it is, I’m pretty sure we got what we wanted, he got what he wanted and we’ll go from there.

Williams smiled at the possibility of facing Palmer’s Raiders in the playoffs.

“It’s going to be a good situation,” Gradkowski said. “The organization is going in the right direction out there, and it’s good for Carson to get back and playing some football. They definitely have some talent, and those receivers can run. We’re not too focused on that around here.”

Lewis said that rookie quarterback Andy Dalton’s solid play in the first six games made Brown more comfortable with trading Palmer. Dalton said on Tuesday that he never felt like his performance would figure in what happened with Palmer.

“I knew coming in here that he wasn’t going to be here and that the job was going to be open,” Dalton said. “It’s nothing that I’ve worried about.”

Lewis appreciated the way Palmer pressed his case for a trade behind the scenes, avoiding media interviews and public posturing.

“I think Carson has handled this like the man he is,” Lewis said, “and that’s been great.”

Herd’s Curry worth price of admission