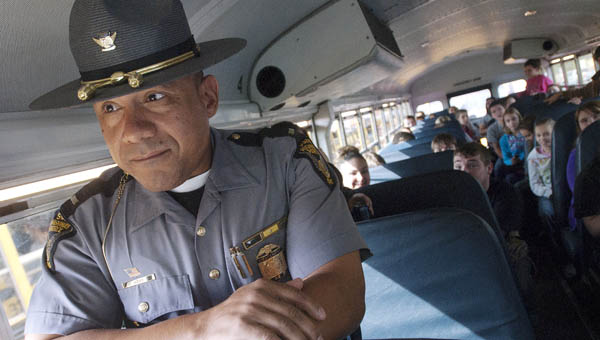 The 25-year OSHP veteran rode along with South Point High and Middle School students on their way home, hoping to catch violators in the act.

He didn’t spot any Tuesday but Gore and his fellow troopers will be stepping up enforcement in school zones and along bus routes in Lawrence County this week to mark National School Bus Safety Week.

According to the Ohio Revised Code, all school buses are equipped with yellow and red lights, and automatically extend stop warning signs when stopped. When a bus stops, drivers traveling both directions on non-divided roadways are required to stop at least 10 feet from the front or rear of the bus and can not proceed until the bus resumes motion or until a bus driver signals them to proceed.

“Anytime you see a school bus you should be aware,” said Gore.

South Point bus driver Jim Matney welcomed the extra enforcement and attention by law enforcement. He has been driving six years and has had at least one close call with a non-compliant driver.

Matney said he was letting children off at an apartment complex when one student began to lag behind.

“This car was facing me and just thought I was being slow and purposefully keeping my sign out. They edged forward just about the time the kid stepped out,” he said, adding the child was not struck or injured in the incident.

Impatient drivers are the biggest danger he sees on his route day in and day out, he said. “A lot of times they are in a hurry and try to pass us before we get to a stop. A lot of them expect me to let them over, but in a lot of areas you can’t let them over,” Matney said, referring to the narrow roads on his route. “They don’t realize if they pass me, there could be a kid standing there. Especially now when we pick up high school students it is still dark and I got people passing me in places they shouldn’t be.”

Bus driver Gary Berry has also had some close calls in his 20 years of transporting children to and from school. He said drivers texting and talking on cell phones are the biggest threats to bus safety.

“I had a lady on U.S. 52 plow out in front of me text messaging,” he said. “She imagined she was at the stop sign but she was in the middle of the road.”

Berry had no students on the bus at the time and was able to stop quick enough to avoid the collision.

He too praised the OSHP efforts this week.

“Hopefully they will make the public more aware,” Berry said. “This is a serious business. Transporting kids back and forth to school is a very serious thing, it involves a lot of lives.”

Bengals decide to move on by trading Palmer to Raiders