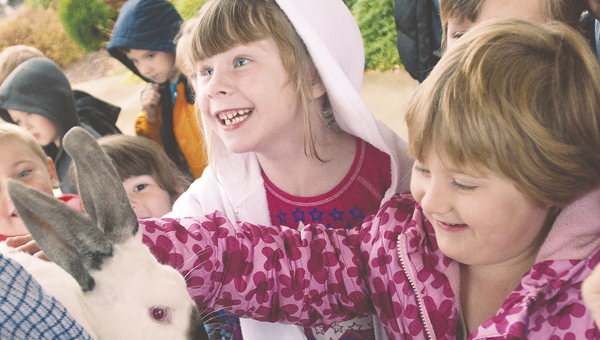 CHESAPEAKE — Butch the pot-bellied pig got a quick case of stage fright just before he made his big debut at Wednesday’s farm day.

As Michelle Nida, his director for the scene, aka his owner and person who gives him his daily bread, pulled him out of his cage, Butch decided to vocalize away his nerves. The subsequent clamor almost took the curl right out of his tail.

That’s when the kindergartners at Chesapeake Elementary learned first-hand how stratospherically loud a pig can squeal.

In the audience lined up under the awning at the school’s front porch, 6-year-old Aleigha Niece took defensive action, jamming her fingers in her ears.

What was grand opera to Butch came out like brakes screeching on wet pavement to the children. That’s why Aleigha’s choice for favorite animal was the soft, cuddly and speaking-nary-a-word Thumper the rabbit.

“I like the bunny rabbit because it is cute,” she said.

Bringing in their animals for the children to the meet and greet were Michelle and her husband, Shane, and dairy farmer and county commissioner Bill Pratt and his wife, Stephanie.

Both couples have children at the school.

The idea for the day came about to show the students in real life what they had been reading about in their farm studies class.

“We’ve been studying the farm unit, the sounds of the animals, their habitat, what they eat,” Jessica Parsons, a Chesapeake Elementary teacher, said. “This was a way for the children to see farm animals. A lot of kids haven’t been to a farm. This was bringing the farm to them.”

Besides Butch and Thumper, the Nidas brought Big Mac, Red and Clucky, all Silkie chickens, the Asian breed of chickens noted for feathers that feel like fur to the touch, along with Butch’s distaff counterpart, Petunia.

“Because he goes cock-a-doodle-do,” Dakota said.

As the first classes were making the rounds petting beast and fowl, the Pratts showed up leading Daisy, an 11-day-old Holstein calf.

“Look at the horse,” the youngsters cried out.

Daisy proved a trooper, if a bit blasé to all the attention as she got petted and stroked, but found some fans like Mike Lester.

But Alexia Blackburn needed no words to show who was her favorite.

She just threw her arms around Daisy and gave the Holstein a big hug.

Tots get lesson in fire safety