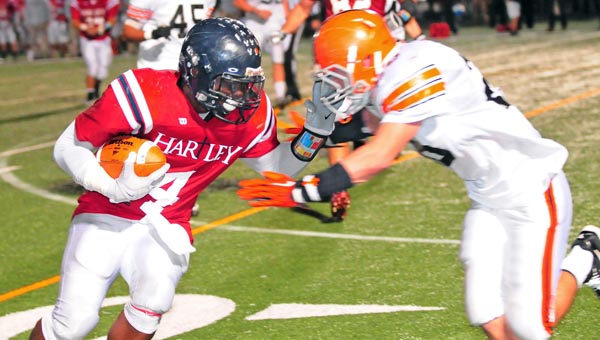 It’s a spread offense in name only. Actually, the spread is more for spreading out the defense.

Simon Kenton has made a living off its spread offense in the past, but now the Pioneers are using the formation to attack teams with their running game.

The Pioneers (2-6) will bring their attack to Tanks Memorial Stadium on Friday to face the Ironton Fighting Tigers.

Ironton (4-4) will be trying to snap a three-game losing streak, all against unbeaten and ranked teams.

“They spread the field, but they’ve got a pretty good running back they like to feature and for good reason,” said Ironton coach Bob Lutz. “He’s quick, he sees the field well and he makes people miss.”

The running back that will be in the sights of the Ironton defense is Nate Powell, a 5-foot-5, 165-pound junior. Powell leads the team with 493 yards on 122 carries and he has scored four touchdowns.

Fullback Trey Pinkleton has 89 yards on 20 carries and two TDs.

Kuntz has also rushed 94 times for 97 yards and a score.

Joining Swanson at the receiver position are Tyler Wilke (5-11, 165) and Jacob Huseman (5-10, 145). Wilke is the team’s second leading receiver and Powell is third.

The secondary has Ray Webb (6-0, 178) and Swanson at the corners and Pinkleton the safety.

Bowling leads the defense with 72 tackles including 35 solo stops. Tate Huesman has 68 tackles, Mills 56 and Pinkelton 45.

The Pioneers took a 14-7 lead over favored Dixie Heights last week before the Colonels tied the game at the half and then got a pair of scoring passes in the third quarter as they pulled away to a 35-14 win.

Simon Kenton (2-6) is a Class 6-A school, the largest enrollment division in Kentucky. They have 75 players on the roster not including freshmen.

The Pioneers have a solid tradition. They were state runners-up in 2008 and regional finalists the past two seasons.