Vikings host Titans in battle for SOC I crown 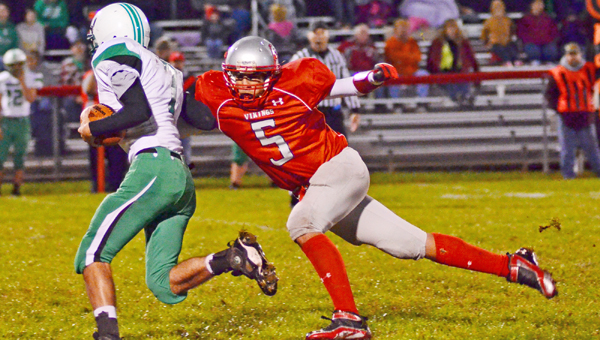 WILLOW WOOD — This is getting to be habit forming for the Symmes Valley Vikings. It’s a habit they like but it’s one they would like to end on a positive note.

For the third straight year, the Vikings are facing a winner-take-all for the Southern Ohio Conference championship. The past two seasons have ended with losses to Oak Hill that has left the Vikings are runners-up.

This year the Vikings are hosting the Portsmouth Notre Dame Titans and both teams are 7-1 on the season and unbeaten in the SOC. Symmes Valley is 3-0 while the Titans are 2-0 with Sciotoville East left in the league.

“Our kids have played in big games the last three years. We’ve had SOC championship games and playoff games. All our kids have learned a lot,” said Vikings’ coach Rusty Webb. “I think our experience will help us.”

Also in last week’s win Lewis ran 40 yards for a touchdown and caught the two TD passes while Hoover had 66 yards on 10 carries.

“They’re very balanced on offense. Lewis is an excellent receiver and he knows what to do with it after he catches it,” said Webb.

“Their backs run extremely hard. The bunch that doesn’t get enough credit is the offensive line. Those guys do a good job up front.”

Another key to the game will be on defense. Both teams have played well defensively in their key games. Webb is impressed with the Titans’ defense.

“They run to the ball well and they’re very fundamentally sound in what they do. They are a very disciplined defense,” said Webb.