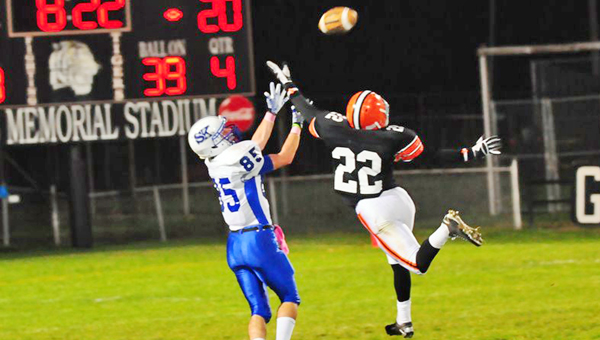 IRONTON — The Ironton Fighting Tigers snapped a three-game losing streak with a 28-20 win over the Simon Kenton Pioneers on Friday.

Ironton racked up 298 total yards with 215 coming on the ground. Tyler Hager ran 14 times for 79 yards and two touchdowns and he also returned an interception 32 yards for a score just before the half to put the Fighting Tigers (5-4) up 20-13.

Trevor White had 68 yards on 14 carries and also caught three passes for 60 yards. Quarterback Tyler Kratzenberg was 4 of 5 for 81 yards.

Simon Kenton (2-7) was led by quarterback Brenen Kuntz who was 15 of 29 for 208 yards including a 78-yard scoring strike to Tyler Wilke in the second quarter that tied the game at 7-7.

Symmes Valley scored 19 points in the second quarter to snap a 7-7 tie and put the game away with 21 points in the third quarter.

COAL GROVE — The Coal Grove Hornets kept pace on their collision course for the Ohio Valley Conference championship with a 28-8 win over the Fairland Dragons on Friday.

The Hornets racked up 340 total yards with 257 coming on the ground. Greg Bender ran 23 times for 168 yards and two touchdowns to pace the Hornets.

Freshman quarterback Jesse Rigsby threw his first career touchdown pass as he hit Bryan Steele on a 57-yard scoring play in the second quarter the put the Hornets up 14-0.

CHESAPEAKE — The Chesapeake Panthers rolled to their fourth straight win as they remained unbeaten in the Ohio Valley Conference with a 48-0 win over the South Point Pointers on Friday.

The Panthers are 7-2 overall and 4-0 in the OVC, thus setting up a season-ending showdown for the OVC title at Coal Grove next Friday.

The Panthers had 490 total yards with 420 coming on the ground. Dylan Nichols ran seven times for 99 yards and a score to lead a balanced attack. Nike Jones ran six times for 87 yards, Patrick Hintz had 63 yards on five carries and two scores, and Brandon Noble had 59 yards on six attempts.

Chesapeake limited South Point to 13 total yards in the first half and just 80 yards for the game.

“Mr. & Mrs. Scarecrow,” watercolor. PROCTORVILLE — When Barbara Delligatti picks up a brush, her first concern is to let... read more