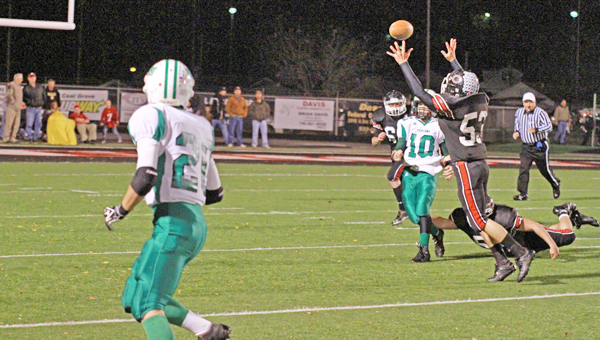 COAL GROVE — It was a sprint and a marathon rolled into one for the Coal Grove Hornets in a 28-8 Ohio Valley Conference win over Fairland.

A fast start turned into a slowdown in the first quarter as the Hornets scored on the opening possession of the game when Greg Bender found a hole and raced 61 yards to the end zone. However, the two-point try was no good and the score was 6-0 at the 9:34 mark of the first.

“The kids did a good job and we were able to control the ball for the most part, but Fairland has a good defense and forced our offense to make some big plays,” Coal Grove coach Dave Lucas said.

After forcing a Fairland punt early in the second quarter, Coal Grove looked to extend the lead. However, after moving to the Dragons 49-yard line, quarterback Alex Bare ran for an 11-yard gain but had to leave the game with a leg injury. On the first play, Jesse Rigsby could not handle the snap and the Fairland recovered the fumble at their own 38.

The defense would get the ball right back to the offense when Bryan Steele intercepted the Kyle Sowards’ pass. After a 3-yard run by Bender, Rigsby got redemption when he found Steele for a 57-yard pass. Bender added the two-point conversion to make the score 14-0 with 6:31 to go in the half.

“I have got confidence in Jesse and he is going to be a good football player. He had nice poise and did not lose his cool (after the fumble) and I was really proud of him,” Lucas said.

Fairland (3-6, 2-2) would come right back on the next possession when Eric Riley capped a five-play, 61-yard drive with a 42-yard jaunt. The Dragons lined up for the extra-point, but Riley took the snap and ran in for two to make the score 14-8.

After a Dragons’ interception of Bare and a punt by Fairland, Coal Grove got the ball back with 56 seconds remaining in the half.

Kyle Estep ripped off a 16-yard run on first down. Two plays later, Bare found Jordan Beals on a screen pass down to the Fairland six. A facemask penalty on the play moved the ball to the three, but a false start on the Hornets moved the ball back to the eight.

After an incompletion of first down, Bare scrambled to the one; and on the next play, Bender capped off the drive and added the two-point run to make the halftime score 20-8.

Coal Grove (6-3, 4-0) recovered an onside kick to open the second half and marched to the Fairland 23-yard line before turning the ball over on downs.

On the first play of the ensuing possession, Dragons running back Tyree Ceasar was stripped and the Hornets took over at the Fairland 23.

Five plays later, Kyle Estep capped the drive with an 11-yard touchdown run. Bare found Steele for the two-point conversion to set the final score of 28-8.

Greg Bender led the Hornets with 195 yards on 25 carries and two touchdowns. Estep finished the game with 44 yards on eight carries.

Fairland was led by Eric Riley who finished the game with 120 yards on 12 carries and a score.

The win for the Hornets sets up a showdown at home next week with Chesapeake for the OVC championship.

The Hornets also have renewed life in the playoff picture after the Ohio High School Athletic Association ruled that Trimble’s decision not to honor the agreement would result in a forfeit of their previously scheduled game with the Hornets.

By JIM WALKER Tribune Sports Editor CHESAPEAKE — It was business as usual for the Chesapeake Panthers. Faced with a... read more