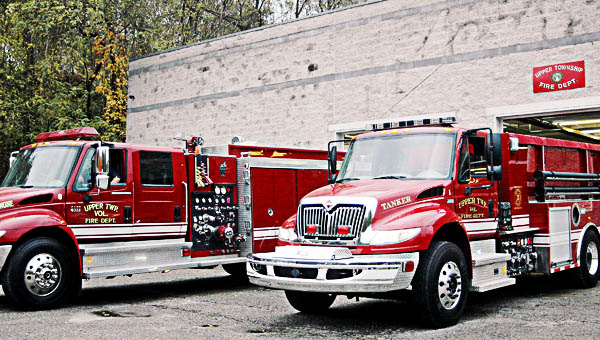 Two of the Upper Township Volunteer Fire Department’s trucks sit outside the new station in the former Lambert’s Grocery Store on State Route 141. The department will host an open house and 50th anniversary celebration for the community from noon to 4 p.m. Saturday.

UPPER TOWNSHIP — It has been about three years in the making, but the Upper Township Volunteer Fire Department is ready to celebrate its new home.

Just a stone’s throw from two former locations, the department’s new station, on State Route 141 in the former Lambert’s Grocery Store, will be open to the public on Saturday for a celebration.

The department will also celebrate a major milestone — its 50th anniversary.

“I’m tickled to death with it,” said Chief Jeff Scott about the milestone. “I’m excited to be a part of it.”

The Upper Township VFP has grown from a one-truck fire station on Ben Howell Road to a six-truck and one four-wheeler unit with 15 active volunteers.

The new station is the fourth in the department’s history, but a much-needed upgrade, said Scott and Captain J.D. Pancake.

“We didn’t have enough room,” Pancake said of the former, 60 by 100-foot location on Hog Run Road, which is now for sale. “We had to park the trucks and trailers outside.”

At the new location, the bay area alone is 75 by 80 feet and can house all the vehicles.

“This building has everything we need,” Scott said. “The trucks used to be packed in so tight. The equipment was being run over and trucks damaged.”

When the department moved to the new location, there was much work to be done, removing the deli cases and shelving that made up Lambert’s Grocery Store. Garage doors were installed, concrete floors were poured and the walls painted. The ceiling tiles will also be replaced and a kitchen installed.

In the future, Scott said, the station will be used as a disaster shelter for the community in emergency situations. In May, Scott said about 10 to 15 people found shelter at the station when torrential rains prevented safe driving down State Route 141.

“We could shelter quite a few people in here if we had to,” Scott said.

From noon to 4 p.m. Saturday, the community is invited to see the new station and join in the 50th anniversary celebration. There will be food, inflatables and safety demonstrations from various county organizations. They will also honor past firefighters.

“I would like (the community) to come out and see the hard work that the guys do,” Scott said. “We want to encourage former members to come out; people we haven’t seen for a long time.”

Local handicapped children will get a taste of hunting and the outdoors while being housed in a lodge for a... read more