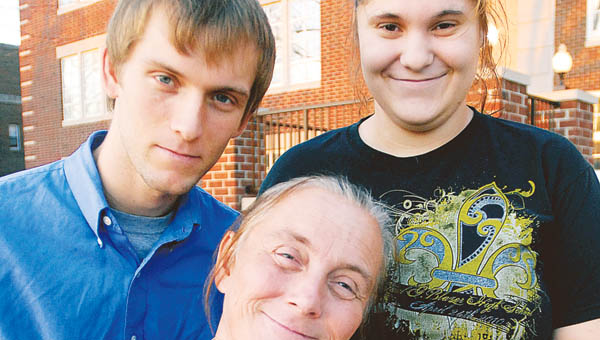 Jackie Sizemore, seen with her son Bobby Sizemore and daughter Melissa Sizemore hosted a vigil for daughter and sister, Jackie who died in a house fire in Pedro a year ago.

Jackie Sizemore recalls that her daughter, also named Jackie, sat out of school a year after graduating in 2009 from Ironton High School before deciding to go to college.

“But when her brother (Bobby Sizemore) said he was going that got her started back and they both went to the university over here.” Mom’s face bends into a soft wistful smile as she speaks of her 20-year-old daughter.

That September when her daughter enrolled at Ohio University Southern, the future looked bright. But then came October and a tragic fire. The younger Jackie’s future, once great, came to an emphatic and premature end. She was one of five people who died October 2010 in a house fire in Pedro.

Along with Sizemore, Rebecca Sue Hall, Ashley Renee Keaton, Rachel Lee Whitmer Laber, and a baby, Xzavier Rayan Keaton, lost their lives. The fire, which started near a space heater, was ruled accidental.

“They said when they found her she had her hands folded like she was praying and she had a smile on her face,” Mom recalled.

Monday night Jackie’s mom, her brother Bobby, her sister, Melissa and some of Jackie’s friends gathered on the lawn at Ironton High School to remember the girl who was invariably described in endearing tones as a clown, a dear friend and sincere Christian.

Lisa Jackson was a lifelong friend.

“We went to school together. She was a sweet, sweet person,” Jackson remembered. “I ran track with her.”

And that’s the way her brother wanted her to be remembered.

“She was a great person,” Bobby Sizemore said. “She didn’t do wrong to anybody. Even though this (vigil) is for her, there were others who died and they all should be remembered. They should never be forgotten.”