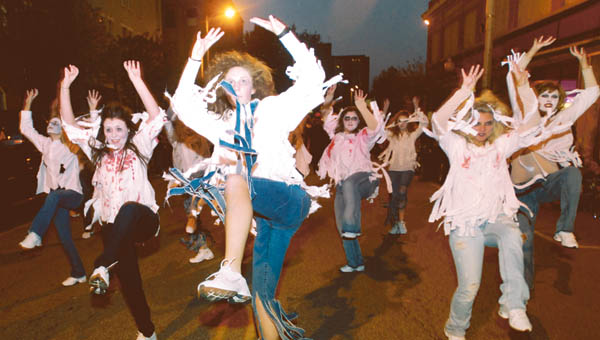 Members of the Ironton High School Million Dollar Marching Band flag core perform to the music of Michael Jackson’s “Thirller” as they make their way down Third Street in downtown Ironton during the annual Halloween parade Monday evening.

Three-year-old Derek Pack stood outside the Ironton City Center Monday night with a pair of tightie whities on his head.

Normally his mom, Cindy, would be a bit embarrassed by such behavior but Monday night she was positively beaming: her idea for Halloween costumes for her kids stood out in the crowd at the annual Ironton Safe Trick or Treat.

Derek was a washing machine for the night, his outfit was a handmade appliance complete with a bottle of Tide detergent and a little window in front of his tummy. And the skivvies.

“What sold him (on the outfit) was getting to wear his underwear on his head,” his grandma, Nancy Corn, mused. His brother, Gavin, who is 7, was a boy abducted by an alien.

Several hundred children lined the streets of Ironton Monday night to strut their once-a-year wardrobe and to collect candy from more than a dozen businesses, civic and government organizations.

A line of bumble bees and princesses and turtles made their way in and out of the city center and then down both sides of Third and adjacent streets to avail themselves of what must have seemed like a utopic supply of Halloween goodies.

Some of the costumes were cute. Three-year-old Quentin Brown was dressed as the tin man from The Wizard of Oz. Along with him, C.J. Martin was a ninja, Kersten Roach was Batman, Kiandra Martin was an eskimo for the night, Khamil Martin was a dalmation. Dalmations were well represented among dog breeds Monday The Sly Family, of Pedro, more than five in number, was a family of dalmations, with Mom dressed as Cruella Deville.

Some costumes were designed to be scary. Kati Owens’ zombie girl outfit was complete with a headless teddy bear. The head of the teddy had been fashioned into a bowl for that trick or treat loot. Jeff Freels’ freakish head sat atop a scarecrow body. He carried a long stick on his back, his arms draped around it.

“I saw the mask and I thought, ‘I gotta get it,’” Freels explained. His step-son, Timmy Boggs was an evil-looking pumpkin.

Others required a bit of thought and planning. Landon Clay’s space shuttle, fitted atop a little red wagon, took two weeks to make.

Others were, well, unique. Teenager Josh Thacker came as a horse, not a cuddly stuffed kiddie horse but a rubbery faced horse, its mouth frozen into a permanent whinny. His friends, Jordan Melvin came dressed as a caveman and Cody Melvin came dressed in a straight jacket.

“I just wanted one and got it and wore it,” Cody Melvin said of his nod to insanity. “I thought it would be awesome. I didn’t really get it for Halloween.”

The candy bowls were frequently manned by adults who got in on the act by dressing up, too. A ghoul passed out candy for the Blue Knights Motorcycle organization. Another Blue Knight was dressed witch and a third was dressed, appropriately enough, as a biker.

The Lawrence County Sheriff’s Office brought along McGruff the crime dog, who shook hands with the children on their way out the door.

Rich and Diane Patrick, of Patrick Insurance, handed out candy at the city center.

“We feel like this is a great thing for a community, it pulls everybody together,” Diane Patrick explained.

Some made notes on cute costumes as they came around a circle of tables.

“We saw a Geisha girl and she was cute,” Jane Griffith, of Friends of Ironton said. “She had the parasol, the hair, the whole nine yards. She was cute.”

At 7 o’clock, the ladybugs and fairies and ghouls of all varieties formed a line that snaked its way from Center Street fountain to the friends of Ironton Skatepark on Second Street where members of the Ironton Rotary Club judged the costumes and awarded prizes.

Driver-testing office in city could close