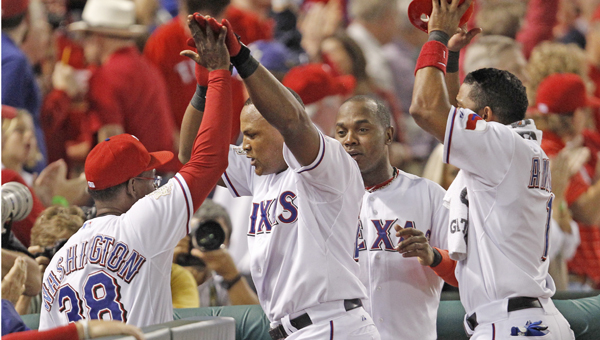 ARLINGTON, Texas (AP) — A long drive by Mike Napoli, a lucky bounce near the mound and suddenly the Texas Rangers were on the brink of their first World Series championship.

Napoli delivered the biggest hit of his charmed season, lining a tiebreaking two-run double in the eighth inning that sent the Rangers past the St. Louis Cardinals 4-2 on Monday night for a 3-2 edge.

The slugging catcher then capped off his night of double duty, throwing out a would-be base stealer in the ninth as Albert Pujols struck out.

“Pujols is going to put it in play, he’s a good contact hitter,” Napoli said, “and they were just starting the runner, 3-2. As soon as I got it, I just got rid of it and put it on the bag.”

Texas will try to wrap it up in Game 6 on Wednesday night in St. Louis.

If the Rangers eventually do win that elusive crown, the Texas fans who stood and chanted Napoli’s name may forever remember his two-run hit.

“Just trying to get something to the outfield, you know, get a sac fly, get that run across the board,” Napoli said. “I was trying to stay short and I got a pitch I could handle over the middle of the plate and put it in the gap.”

If the Cardinals lose, there’s no doubt which play will stick with manager Tony La Russa for a long, long time.

It was 2-all when Texas put runners on first and second with one out in the eighth, and reliever Marc Rzepczynski was summoned. David Murphy followed with a bouncer back to the mound, a possible inning-ending double play in the making.

But the ball appeared to glance off Rzepczynski’s knee and trickled harmlessly away for a single that loaded the bases. In the dugout, La Russa immediately threw his hands to his head, a true “Oh, no!” moment.

La Russa elected to let his lefty stay in to face the right-handed Napoli, and it didn’t work.

Napoli, who came close to a three-run homer in his previous at-bat, sent a drive up the alley against the pitcher with the nickname “Scrabble.” The double off Rzepczynski sure spelled good things for Texas, with excitable manager Ron Washington waving the runners around from the dugout.

Darren Oliver earned the win and Neftali Feliz closed for his second save of the Series and sixth of the postseason.

After a travel day, the Series will resume at Busch Stadium with Colby Lewis facing Cardinals lefty Jaime Garcia. The weather forecast in St. Louis is daunting, calling for rain and temperatures around 50.

Later, it became a battle of the bullpens and Texas prevailed.

Octavio Dotel gave up a leadoff double to Michael Young in the eighth, struck out Beltre and intentionally walked Nelson Cruz. That left it up to Rzepczynski, and the game quickly slipped away.

La Russa appeared stunned by the turnaround. Later in the eighth, he brought in reliever Lance Lynn and had him issue an intentional walk to the only batter he faced. Jason Motte eventually ended the inning, but it was too late.

Fittingly, Napoli had a role in the final play. Lance Berkman struck out and the ball hit Napoli’s shin guard and trickled up the first base line, where the catcher picked it up and tossed to first base to end the game.

Pujols drew three intentional walks, including a pass with two outs and none on in the seventh. The St. Louis slugger then nearly used his legs to put his team ahead.

Pujols was running hard on a 3-2 pitch that Matt Holliday hit for a single to left-center. Pujols chugged around the bags and third base coach Jose Oquendo initially waved him home, only to put up a late stop sign.

Would Pujols have been safe on shortstop Elvis Andrus’ wide throw to the plate? Maybe. But it became moot when Lance Berkman was intentionally walked to load the bases and David Freese flied out against Alexi Ogando.

Beltre’s homer made it 2-all with two outs in the sixth. He dropped to one knee after following through on a meaty cut. He connected on a big curve from Carpenter, who had easily handled Josh Hamilton and Young to start the inning.

Beltre’s other homers this October came in a bunch. He hit three in a first-round playoff game at Tampa Bay.

Napoli almost gave Texas a cushion later in the inning. With the crowd standing and chanting his name as “Nap-Oh-Lee” flashed on the scoreboard, the catcher’s bid for a three-run homer was caught on the warning track in right-center field, just shy of the 407-foot mark.

The homer let Wilson avoid becoming the first pitcher to lose four times in a single postseason. The eccentric lefty who alternates red and blue gloves between starts had another uneven outing, working around five walks.

Wilson walked six while losing Game 1 to Carpenter and the Cardinals.

Moreland atoned for some glove woes with a home run in the third, hitting a drive halfway up the second deck in right field.

The Cardinals scored twice in the second, cashing in two leadoff walks sandwiched around a wild pitch.

Yadier Molina notched his fifth RBI of the Series with a single that left fielder Murphy overran and fumbled for an error. Skip Schumaker followed with an RBI grounder to first that Moreland boxed around, preventing any chance at a double play.

Murphy made a diving catch to end the inning, denying Nick Punto a run-scoring hit. Punto carried his bat all the way to first base and tried to break the wood by bending it over his right thigh.

Already ahead 2-0, the Cards threatened in the third after Wilson slipped coming off the mound trying to field Rafael Furcal’s leadoff bunt and made a poor, backhanded flip that skittered past Moreland. But with runners at the corners, Wilson got Holliday to bounce into a quick double play. Not so surprising, really — Wilson induced the most DP grounders in the majors this year while St. Louis hit into an NL-record 169 double plays.

Holliday flied out with the bases loaded, after an intentional walk to Pujols, to finish the fifth.

NOTES: Playing on his 34th birthday, Furcal led off the game with a liner that 3B Beltre backhanded. Furcal started Game 4 the same way. … Wilson matched the postseason record for walks — 19 — set by Cleveland’s Jaret Wright in 1997. Wilson’s 11 walks in the World Series are the most since Allie Reynolds in 1951. … Pujols flied out on a 3-0 pitch to end the first. He swung at 15 of 37 pitches on 3-0 counts this season, going 4 for 8 on the balls he put in play. … Cardinals reliever Arthur Rhodes turned 42. He’s the oldest player to celebrate a birthday while playing in the Series. Jim Palmer was 38 in 1983.

Playoffs won’t be settled until final games are played