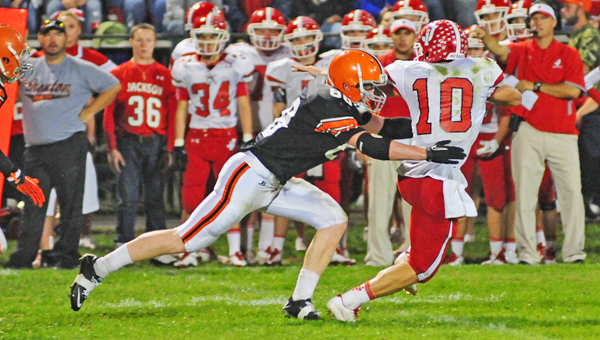 It might not just be a coincidence that Ironton is playing Portsmouth so close to Halloween.

The Fighting Tigers face a scary game against the Trojans who have been a tough opponent even in their down years.

Portsmouth is only 3-6 this season, but Ironton coach Bob Lutz is not about to take the Trojans lightly.

“They’ve got a lot of skilled kids who can make big plays. They’ll definitely pose a threat to our defense,” said Lutz.

The two key weapons in the Portsmouth offense are quarterback Mason Jordan (6-2, 170) and speedy running back Zaide Whitley (6-0, 173). Jordan threw for more than 1,000 yards last season.

“They both have big play capabilities,” said Lutz.

Despite their record, the Trojans have played well the past five weeks and played well early in the season, losing in overtime to Wilmington before dropping two tough games to Portsmouth West 26-13 and Wheelersburg 28-19.

When the Trojans hit the midway point of the season, first came a 31-24 overtime win over Chillicothe. After a loss to unbeaten Jackson, the Trojans beat Cincinnati College Prep 46-6 and nearly pulled off a shocker before losing 10-7 to Gallipolis.

“They’re playing well at the right time of the year,” said Lutz. “It’s a given that they have great skilled players and can score, but their defense has played better lately. It’s always a tough game against them. We both know each other well. It’s a nice rivalry game.”

While Ironton will try to limit Portsmouth’s big plays, the offense will have to contend with an equally athletic defense.

“Their defense isn’t that big, but they’re quick, athletic and very aggressive,” said Lutz. “The secondary is quick and athletic and they’ve got some nice linebackers. I really like (Horsley).”

Horsley is joined inside by Porter and Evans.

Bryan Sexton (6-0, 200) plays nose guard and will move to linebacker when the defense switches to a four-man front.

The secondary has Adams and Whitley at the corners and Jordan at the safety.

Last year Ironton jumped out to an early lead thanks to a fumble on the opening kickoff and a couple of other turnovers.

“We were able to take advantage of some breaks early and get a lead. We know we’ll get their best shot again,” said Lutz.

Ironton and Portsmouth have played more times than any schools in Ohio high school history. The Fighting Tigers 45-25 win last year evened the series at 54-54-8 including 30-9-1 under Lutz.