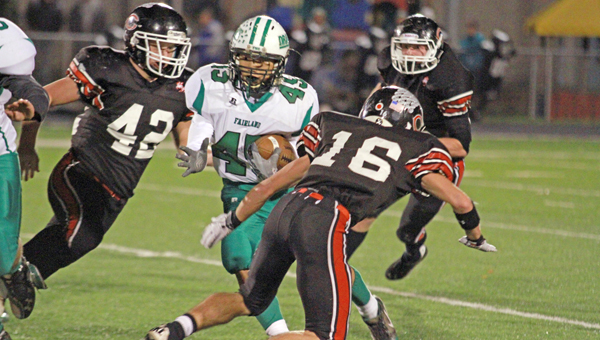 Coal Grove’s Brandon Hogsten (42) and Jordan Beals (16) close in to make the tackle on Fairland’s Nathan Campbell. The Hornets host Chesapeake on Friday in a game to decide the OVC championship. (The Ironton Tribune / Courtesy of Joe Stevens of FJS Photos)

On the surface, veteran Hall of Fame coach Dave Lucas and first-year head coach Andy Clark seem to have little in common.

Except on what they think will decide the outcome of Friday’s showdown for the Ohio Valley Conference championship between Lucas’ Coal Grove Hornets and Clark’s Chesapeake Panthers.

Chesapeake comes into the game 7-2 and 4-0 in the OVC. The Panthers not only need a win to claim a second straight OVC title, but to qualify for the Division IV playoffs.

Coal Grove is 6-3 and 4-0 in the league. The Hornets also need a win to claim the title and keep their Division V playoff hopes alive.

So what is the deciding factor?

“It’s like any other game. It comes down to turnovers and execution,” said Lucas.

“At this time of the year the team that executes the best wins, and that has a lot to do with the offensive line. The trenches are big. Turnovers and who gets the job done on special teams will be a key, too,” said Clark.

Chesapeake rallied to beat the Hornets 25-22 in the closing seconds last year and win the title in a similar final game showdown.

This time the two teams will meet with similar styles and personnel.

“They’ve got a good team. We have to stop their quarterback (Austin McMaster). He’s a good football player,” said Lucas. “Their backs are small, quick kids. The fullback has decent size and he runs wells.

“As a team they are more versatile on offense this year. They run multiple sets.”

Clark said the Hornets also have a quarterback who can run and throw that adds another dimension to the offense.

“Their offense is a concern for us. They have different guys to give the ball to and their quarterback can throw,” said Clark.

Both teams rely on the running game but have the ability to put the ball in the air.

Greg Bender has 85 carries for 682 yards and eight touchdowns to lead the Hornets’ ground game.

Kyle Estep has 47 carries for 238 yards and quarterback Alex Bare 30 attempts for 249 yards and four scores.

Bare is 21 of 45 passing for 507 yards and seven touchdowns. He has just two interceptions. On the receiving end are Bryan Steele with 11 catches for 296 yards and four TDs and Jordan Beals with seven grabs for 144 yards and two scores.

For the Panthers, Patrick Hintz leads a balanced ground game with 67 carries for 694 yards and 13 touchdowns.

McMaster has hit 48 of 94 attempts for 738 yards and six touchdowns and five interceptions. Javon Thompson has caught 16 passes for 450 yards and five TDs while Tommy Noble has 12 catches for 136 yards and a score.

While the offenses get most of the attention, both coaches are impressed with their opponent’s defense.

“They have a good defense. They’re very aggressive. They have some nice linebackers,” said Lucas.

“Defensively they mix it up differently against each team they play. I’m sure we’ll see something different,” said Clark.

Even though there is a lot at stake for the winner, both coaches want their teams to focus simply on winning this game.

“All season our kids haven’t looked ahead,” said Clark. “We haven’t had any letdowns. We can’t make the playoffs or decide who we play unless we beat Coal Grove. We have to take care of the matter at hand.”

Thanks to the OHSAA ruling in favor of the Hornets and awarding them a forfeit win with their game against Trimble, Lucas is glad his team still has a chance to make the playoffs. But he said winning is the important thing.

“We just want to win the game. We’re playing them one at a time and now we’re playing this one. It’s a challenge. We know what’s on the line,” said Lucas.

Although the Panthers return nine starters from last season, Clark said there is no guarantee his team will win.

“It was a close game last year and we expect the same this year. I think they’ve improved up front. They replaced a lot of guys from last year. Their kids are pretty consistent in what they do and how they play,” said Clark.