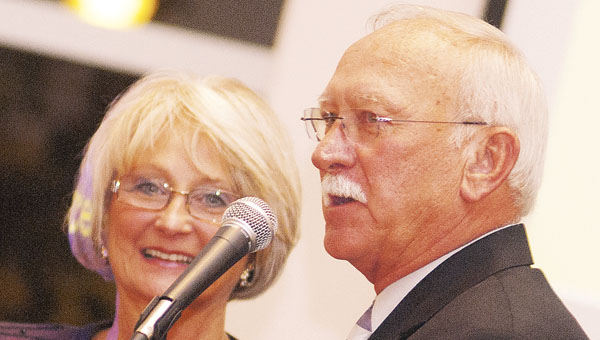 Ohio Lt. Gov. Mary Taylor was among the more than 100 local dignitaries, business owners and professionals who gathered on the campus of Ohio University Southern Thursday night for the Annual Lawrence County Chamber of Commerce Awards Dinner.

The chamber recognized individuals and businesses that have made outstanding contributions to Lawrence County’s economic progress in the past year through their businesses and personal contributions.

Business of the Year

McSweeney’s Incorporated was given the 2011 Business of the Year award. Founded by Larry McSweeney in 1967 the company, which produces products for the international mining, railroad and road construction industries, continues to be family owned and operated.

McSweeney’s son, Joe serves as chief operating officer and heads up sales and production, while Joe’s sister, Sandra Blackburn, is vice president and office manager. Described in a short video clip introducing it as “a power horse for the economic engine in South Point,” the company employs 140 and has a stellar workplace safety record, recently reaching more than 1,095 days without a workplace injury.

Blackburn and Joe McSweeney accepted the award on behalf of the company. A teary Blackburn, thanked the chamber as well as her family members and God for her blessings.

“We’ve been doing this a long time — 45 years in February,” she said, adding “It’s been a pleasure to work with my family.” She said although it can be tough to work with family members, they have communicated well over the years.

Business Person of the Year

Husband and wife team Sharon Hartwig and Charles Kunkle, operators of Close to Home III assisted living, were co-recipients of this year’s Business Person of the Year award.

The couple transformed a 100-year-old vacant school building into a 32-unit building for the elderly, which is now fully occupied. Hartwig handles the clinical day-to-day operation of the facility and marketing while Kunkle specializes in real estate development, planning, marketing and financing.

“Without the help of Lawrence County we could not have done this project,” said Hartwig.

In addition to being 100 percent occupied the facility received high marks by state regulators who found no deficiencies.

“We are very proud of our facility and our employees and we want to say thank you for the award,” she added.

Business Entrepreneur of the Year

Dr. Mike Dyer, one of the owners of Proctorville Animal Clinic, was honored with the Business Entrepreneur Award. His business is undergoing an expansion, which will double its capacity and bring in the latest technology. It currently employs 35 individuals. Dyer earned his Doctorate of veterinary medicine from Ohio State University in 1993. After returning to Ashland, Ky. to enter private practice with Advanced Veterinary Services, he expanded its large animal veterinary services in 1998 with the development of the Equine Medical Center in Chesapeake.

Upon accepting his award, Dyer thanked his family and staff.

“My father told me to be successful you really should surround yourself with good people and I certainly have done that,” he said, adding “I pass this honor on to you, lovely citizens of Lawrence County.

“This is a great place and I have a vision for Lawrence County… I am living the American dream and I am committed to sharing that with the young people of our county. I want to be a part of that and see that happen for all the youth that are the future of Lawrence County.”

Public Servant of the Year Award

The Public Servant of the Year Award was given to Grayson Thornton, of Proctorville, chairman of the Symmes Creek Restoration Committee.

Thornton has chaired the non-profit volunteer organization since 2000.

This year with the help of its committee members and partner organizations, volunteers cleared more than 18 log jams and removed trash and other debris from along 60 miles of waterway. Their goal is to protect Symmes Creek as a habitat for wildlife and a resource for outdoor recreation.

“This is a real honor and we certainly appreciate it,” said Thornton, who said he shared the honor with those on the committee as well as volunteers and partners of the organization.

“Everything we have done along Symmes Creek, in and for Lawrence County has been a tremendous team effort. In a great county you have great help and that certainly is this county.”

Young Professional of the Year

Jimmy Lemon was awarded the 2011 Young Professional of the Year Award for his dedication and tireless effort on behalf of the Lawrence County’s Young Professionals’ Secret Santa project. Lemon is a 2005 graduate of Dawson-Bryant High School and received a bachelor’s degree in pastoral studies from Cedarville University.

He is a full-time staff member at Cross Community Church in South Point and is a student at OUS, where he is working toward a specialized studies degree with concentrations in graphic design and communications.

Lemon used the opportunity Thursday to promote the Secret Santa program and solicit additional support from community to benefit this year’s project. He thanked those who have already helped the organization with the project, adding,

“If you are feeling generous around the holiday season you can make your checks payable to LCYP Secret Santa,” he said. Lemon also welcomed more young professionals to join the organization.