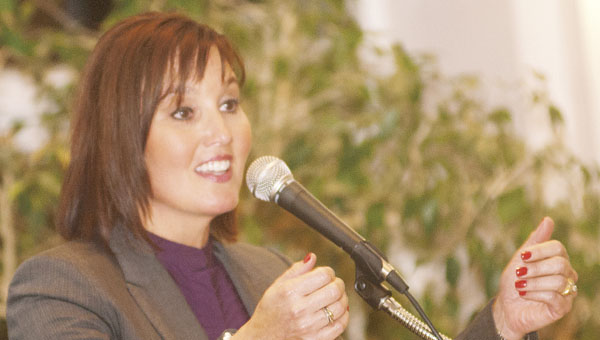 Ohio can lead the economic recovery instead of lagging behind as it has in the past, Lt. Gov. Mary Taylor, told attendees of the Greater Lawrence County Area Chamber of Commerce Awards Dinner Thursday.

But first, she said, it must reform Ohio’s regulatory system to remove legislation viewed as restricting business and economic growth in order to build an economic environment that can attract and retain new jobs.

Taylor, who arrived late to Ironton for her keynote address at Ohio University Southern, touted her and Gov. John Kasich’s efforts to close an $8 billion state budget gap without raising taxes. Those efforts have included rolling back laws including Ohio’s death tax, seen as unfriendly to business, and passage of the controversial Senate Bill 5, which restricts public employees’ right under collective bargaining.

She also shared examples of how the administration has been able to help address long-standing problems that have hampered specific businesses in Ohio through the administration’s Common Sense Ohio Initiative, CSI Ohio.

Addressing the association many individuals have with the acronym CSI and the popular television show, Taylor said, “We are doing real life investigation of job killing rules and regulation every day in Ohio and we’re going to hold the perpetrators accountable and we are going to make sure we get rid of those job killing rules and regulations.” She blamed Ohio’s loss of more than 600,000 jobs over the past decade on a state economic environment that is not friendly to business start ups.

She added the administration will work with partners of any political affiliation to remove barriers to business growth.

“Partisan politics don’t matter, when it comes down to helping businesses in every community across the state being successful,” she said.

Taylor also discussed the administrations’ Buckeye Forever, which allows students who graduated from an Ohio high school and later moved out-of-state to pay in-state-tuition for masters’ degrees at Ohio institutions.

She added the administration is working on research and address the effects of implementing the Patient Protection and Affordable Care Act, better known as ObamaCare on Ohio but is uncertain about certain aspects because the law is still being written in many areas. Taylor said the state does anticipate adding more than 1 million Ohioans to Medicare and that 660,000 fewer Ohioans will get insurers from their employers when the law is fully implemented. She said premiums will also more than likely go up for small business owners and individuals who purchase insurance independently.

She said the state needs to find “an Ohio solution” instead of a “one size fits all mandate from Washington that is quite frankly, bad for our state. We need a consumer driven approach that allows you the consumer to be informed about the health care services you purchase and the health insurance coverage you purchase to cover those costs so you can make the best decisions for your family and make the best decision for your employees,” she said.

“We need a system that reinforces the free market and allows capitalism to work, allows competition to work so we are doing everything we can to drive down the health insurance cost for every single Ohioan.”

Taylor concluded her speech by saying she would work hard over her remaining term in office.

“I’m going to do my part, so that we, and all of us in this room can preserve and protect and defend the American dream because I want all of us to be able to say to our kids and our grandkids if you work hard in Ohio and the United States of America you can be whatever it is you want to be.”

Commission to borrow $3M at under 2 percent interest

The $3 million needed to fund partially repair work of the county’s infrastructure, damaged from the spring and summer deluge,... read more