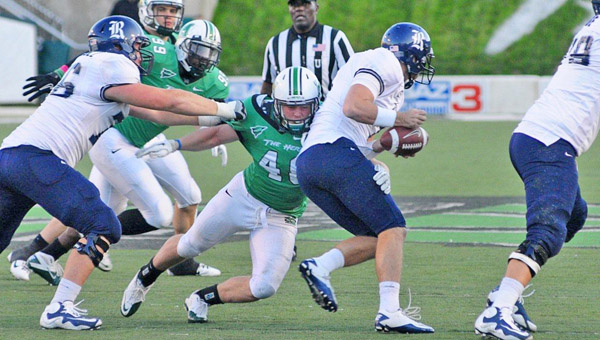 HUNTINGTON, W.Va. — Another week, another quarterback to stop.

After facing Houston’s record-setting Case Keenum last week in a 63-28 loss, the Marshall Thundering Herd hosts the Alabama-Birmingham Blazers at 3:30 p.m. on Saturday in a key Conference USA game for the Herd.

Marshall is 3-5 but 2-2 in the East Division of C-USA. The Blazers are just 1-6 overall and 1-3 in the league, but they are coming off a stunning 26-24 win over Central Florida last week.

Marshall lost 16-6 at UCF in a game that saw the defense score the Herd’s only points.

“As you know we have a UAB team coming in here that, to be honest with you, is a very scary and dangerous team. They have a lot of talent on their football team as they showed last week in the win over UCF,” said Holliday.

Perry was 31 of 42 for 327 yards and two touchdowns against UCF for a Blazers’ offense that is ranked No. 118 in scoring offense.

However, Holliday said the win over UCF wasn’t a fluke. He noted the Blazers have shown their potential in the past as well.

“It’s the same team from a year ago that went to Southern Miss and beat Southern Miss. They have extremely skilled athletes,”

The Herd beat Rice 24-20 two weeks ago before losing to the 18th-ranked Cougars.

Marshall’s recent offensive surge is due largely to red-shirt sophomore quarterback A.J. Graham who took over as the starter in the win over Rice. He replaced freshman Rakeem Cato who had a good completion rate but failed to get the Herd into the end zone.

“As long as he plays well, it’s his team,” Holliday said of Graham. “If he continues to play like he is, then it’s his team. I feel he has made great strides between games and he has to continue in game three. I want to see him continue to grow because he did throw the ball a lot better.”

Marshall’s running game has been sparse with the exception of the scrambling of Graham. Tron Martinez had 45 yards on 16 carries and Travon Van ran 12 times for 43 yards.

The Herd could help their inside running game by using the stronger, more powerful runner Martin Ward who was the MVP of their Little Ceaser’s Bowl win two years ago.

Buckeyes have to find a passing attack