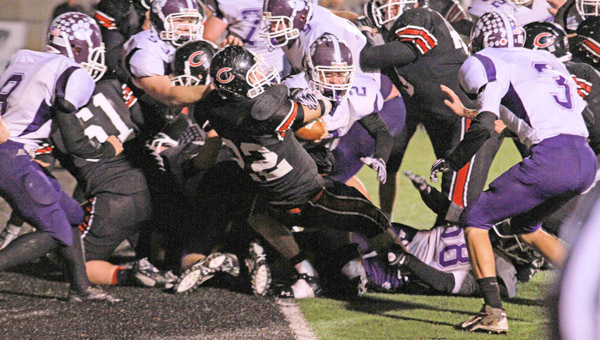 Coal Grove running back Greg Bender (22) scores the winning touchdown from 1-yard out with 43 seconds to play as the Hornets beat the Chesapeake Panthers 20-15 on Friday and win the Ohio Valley Conference football championship. (The Ironton Tribune / Courtesy of Joe Stevens of FJS Photos)

COAL GROVE — Greg Bender ran one-yard for a touchdown with 43 seconds to play as the Coal Grove Hornets rallied to beat the Chesapeake Panthers 20-15 on Friday and claim the Ohio Valley Conference championship.

But the Hornets (7-3, 5-0) used a big third down conversion to keep their final drive alive — a 21-yard pass from Alex Bare to Isaiah Gunther — and also got a 14-yard run by Bare and a 21-yard scamper by Kyle Estep to highlight the drive.

Coal Grove controlled the clock in the first half by running 43 plays to just eight for the Panthers. The Hornets to a 14-8 halftime lead as Bender had a 2-yard scoring run and Bryan Steele caught a 13-yard TD pass just before the end of the half.

Chesapeake had 129 total yards with 118 coming on the ground. Patrick Hintz ran 14 times for 76 yards and Brandon Noble added 58 yards on nine tries including a 14-yard scoring run in the second quarter when the Panthers tied the game at 8-8.

The Panthers are expected to play at St. Clairsville next Saturday in the Division IV playoffs.

Tyler Hager ran 21 times for 197 yards and a touchdown and the Ironton Fighting Tigers overcame four first half fumbles to beat the Portsmouth Trojans 30-14 on Friday night in the rain and mud at Tanks Memorial Stadium.

But Ironton tied the game on a 2-yard run by Trevor White with 4:10 left in the half and White also added the conversion run for an 8-6 lead.

A 25-yard run by Hager fueled Ironton’s first possession in the third quarter and White ran 16 yards for a touchdown to cap the drive. Tyler Kratzenberg’s conversion run put the lead at 16-6.

Jordan hit L.J. Adams with a 23-yard touchdown pass on fourth down and Wayne Evans caught the conversion pass and it was 16-14, but Hager answered with a 57-yard touchdown run and the lead was 22-14 less than two minutes later.

Kratzenberg ran for a first down on a fourth down play at the Trojans’ 43, then kept the ball and went the remaining distance to score with 6:04 to play. White’s conversion run made it 30-14.

Jordan was 6 of 20 passing for 111 yards and two interceptions as Portsmouth finished with 210 total yards.

Ironton is expected to play at Johnstown-Monroe next Saturday in the Division IV playoffs.

Riley and Ceasar had first quarter touchdowns run for a 14-0 lead and Campbell’s 53-yard scoring run made the lead 22-0 at the half.

Riley had a 5-yard TD run and Ceaser went 26 yards for a score and it was 34-0 at the end of the third quarter.

CHESHIRE — The Symmes Valley Vikings built a 21-0 halftime lead and went on to beat the South Gallia Rebels 21-8 in muddy, rainy conditions on Friday.

The Vikings took a 6-0 lead on a 15-yard run by Tyler Rowe just before the end of the first quarter.

Moments later, Jacob Graybeal blocked a punt and Tanner Mays recovered in the end zone for a touchdown. D.J. Miller ran for the conversion and it was 14-0.

Miller bolted 50 yards for a touchdown in the second quarter as the lead went to 21-0 with 4:13 left in the half.

The Rebels (7-3) scored on an 8-yard run by Jacob White who also added the conversion with 1:46 on the third quarter clock.

Miller finished with 87 yards on eight carries as the Vikings rolled up 232 yards rushing. Cody Myers added 58 yards on 14 carries and Alec Herrell had 54 yards on 10 attempts.

Symmes Valley (9-1) are first in Region 23 and is expected to host Trimble next Saturday in the Division VI playoffs.

OAK HILL — Wes Harden ran 25 times for 175 yards and two touchdowns as the Oak Hill Oaks held off the Green Bobcats 20-12 on Friday in a Southern Ohio Conference game.

Harden scored on runs of 4 and 13 yards to make it 12-0 at the half. Daniel Woods went 10 yards for a score just before the end of the third quarter and Chris Fairchild ran for the conversion and it was 20-0.

The Bobcats outgained the Oaks 236 to 231 but suffered four turnovers including three interceptions.

Sandra Blackburn and Joe McSweeney of McSweeney’s Inc. receive the Business of the Year Award during the 2011 Lawrence County... read more