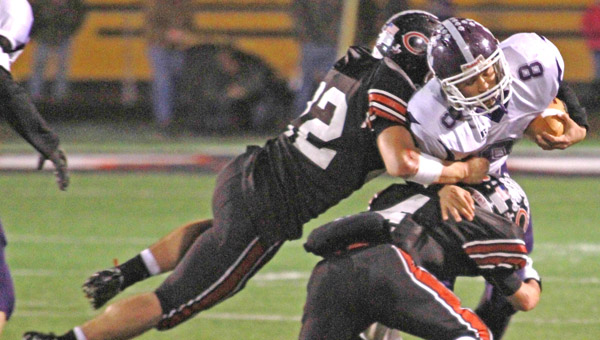 Coal Grove's Brandon Hogsten (left) and Jordan Beals (16) make the stop on Chesapeake running back Patrick Hintz (8). The Hornets rallied to score with 43 seconds left and beat Chesapeake 20-15 on Friday to win the OVC football championship. (The Ironton Tribune / Courtesy of Joe Stevens of FJS Photos)

COAL GROVE — The key word for the Chesapeake Panthers and Coal Grove Hornets was patience on Friday night as both teams faced the weather and defensively weathered the long drives posed by both offenses.

Ultimately, Coal Grove would get a late touchdown to give the Hornets a 20-15 win and the Ohio Valley Conference championship.

With their backs against the wall after Chesapeake had taken their first lead of the game, the Coal Grove offense got the ball with 2:24 to go in the game.

Facing a third down after two consecutive incompletions, Alex Bare found Isaiah Gunther for a gain of 21 yards. Bare would run for 14 on the next play followed by a gain of 21 by Kyle Estep.

A facemask penalty moved the ball to the 4 and two plays later Greg Bender scored with 43 seconds left as he barreled in from one-yard out. Bender finished the game with 91 yards on 28 carries and two touchdowns.

“The kids were able to execute the things that we worked on all week, and I was really proud of how they came out tonight,” said Hornets’ coach Dave Lucas.

“Both teams have the same capabilities and that makes us both very dangerous, but our kids did a great job of executing down the stretch and made the plays that we needed.”

The final drive and score was set up after Chesapeake put a long drive of their own together to take the lead with 2:33 to go in the game. Nate Jones found the end zone from 5 yards out and Jacob Wells added the extra point to make the score 15-14.

The drive covered 80 yards in 16 plays — all rushing — and took 7:13 off the fourth quarter clock. The Panthers were able to convert on a fourth down when Jones found a crease and gained 6 yards.

Three plays later the Panthers faced a third-and-6 when quarterback Austin McMaster took an option play around right end for a gain of 2. However, a facemask penalty on the Hornets moved the ball down to the 5-yard line to set up Jones’ run.

Coal Grove got on the board first albeit after consuming the entire first quarter clock. The drive was capped by a 2-yard run by Greg Bender which saw the Hornets cover 84-yards in 24 plays and consumed 12:42 of the first half clock.

Bare found Colton Bryant for the two-point conversion, and the score was 8-0 with 11:18 in the half. The Hornets also converted on five fourth downs on the drive.

“These kids have had that tendency all year, and for them to go that many plays without any mistakes is a testament of how hard they played and wanted to win this game,” Lucas said.

After the Hornets forced a Chesapeake three and out, the Panthers got the ball back when T.J. McCoy intercepted Bare.

After a 16-yard run on first down, Brandon Noble got consecutive carries and found the end zone from 14 yards out. Quarterback Austin McMaster found Dylan Nichols in the back corner of the end zone for the two-point conversion, and the score was tied 8-8 with 8:10 to go in the half.

Coal Grove (7-3, 5-0) would go on another long drive to salt away the majority of the second quarter clock. The 16-play, 79-yard drive would end when Bare found Bryan Steele from 13-yards out. The two-point conversion was no good and the score at the end of the first half was 14-8.

Coal Grove ran a staggering 43 first-half offensive plays to Chesapeake’s eight. The Hornets also converted 5-of-5 fourth downs in the first half and was 7-of-8 for the game.

“We couldn’t get a stop. They just kept the ball,” said Panthers’ coach Andy Clark. “We moved the ball but we didn’t finish. Give them credit. Up front their line outplayed our line at times.”

Bare added 74 yards on 24 carries and was 7 of 12 passing for 93 yards and a score. Bryan Steele added 52 yards on four receptions with a touchdown.

Chesapeake is expected to qualify in Region 15 of Division IV and play at St. Clairsville. The Hornets may fall a few points shy of qualifying in Division V.