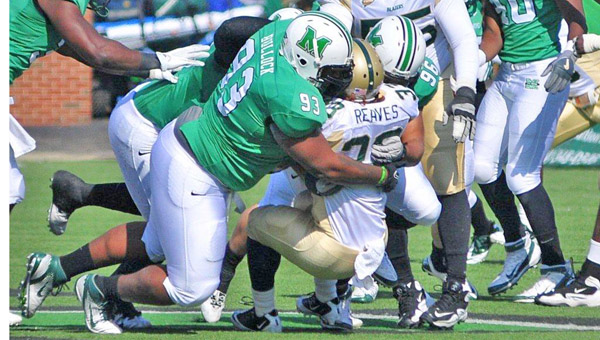 HUNTINGTON, W.Va. — A.J. Graham threw for five touchdowns and the Herd defense added two scores off of forced turnovers to give the Marshall football team a 59-14 win over UAB.

Graham finished the game 19-for-27 with 239 passing yards and threw five touchdowns to four different receivers. The five touchdown feat hadn’t been accomplished since Stan Hill threw for five scores against Kent State in 2003.

“I think that was the most complete game we’ve played since I’ve been here,” said Herd coach Doc Hollidiay after the game. “I knew (this week) that they were going to play well because of the way they practiced.”

“Number one we won. That is the important thing. I think all three phases really clicked. I think it was the best win for me at Marshall.”

The Marshall defense combined for five forced turnovers, three of which were interceptions. Two of the turnovers where taken back for touchdowns including an interception return by Omar Brown and a fumble recovery for a touchdown by Billy Mitchell. The effort made it the first time Marshall had two defensive scores since the GMAC Bowl on Dec. 19, 2001.

Marshall opened up the game with a 54-yard drive that began with a 40-yard kickoff return by Andre Booker. Graham connected with Evans for a 16 yard touchdown pass to allow the Thundering Herd to go up 7-0 early in the first quarter.

Marshall’s kicker, Tyler Warner, added to the lead on the following offensive drive with a 26-yard field goal to make the score 10-0.

Graham went 4-for-5 with 56 passing yards, with a 3-yard touchdown pass to Gator Hoskins early in the second quarter.

Brown and the Marshall defense also contributed to the lead as Brown picked off Jonathan Perry’s pass and returned it 48 yards for a pick-six and on UAB’s ensuing drive, Curry forced his fourth fumble of the year. The Blazer turnover set up an Eric Frohnapfel 4-yard touchdown reception, making the score 31-0.

The score marked the first touchdown of Frohnapfel’s career.

Graham wasn’t done yet in the first half and earned his fourth passing touchdown of the half with a 23-yard touchdown hook-up with Aaron Dobson. The junior wideout recorded his seventh touchdown of the year with the play.

Arrington grabbed an interception to end the first half, adding to the four forced turnovers the Big Green defense tallied in the opening period. The defensive effort marked the first time Marshall had shut out an opponent in the first half since Nov. 10, 2007 against East Carolina. They also limited UAB to only 81 yards in the first half, while the Herd offense combined for 284 total yards.

UAB responded in the opening drive of the third quarter with a 6-yard touchdown run by Nick Adams to avoid the shutout and trim the score to 38-7, but the Thundering Herd grabbed the momentum again with a 38-yard burner to Evans from Graham for his fifth touchdown pass of the game. Evans surpassed the 100-yard mark in receptions with the catch.

During the game, the Marshall defense had four forced fumbles three of them can be attributed to Vinny Curry. With 7:30 left in the third quarter, Curry forced his third fumble and the ball was picked up by Billy Mitchell for a 20-yard touchdown.

The final score ended after Rakeem Cato entered the game and threw a 34-yard touchdown to Hoskins. Hoskins had two receptions in the game and both were for touchdowns. UAB did add another score with minutes left in the final quarter to get their second score of the game.

Marshall takes a bye for the next weekend and then is back on the road November 12 for their next game against Tulsa. The contest will be featured on the Fox Sports Network.

BOE, villages among races in November There are three seats open this fall on the Ironton Board of Education. Tim... read more