Reds pick up option on Phillips but not Cordero 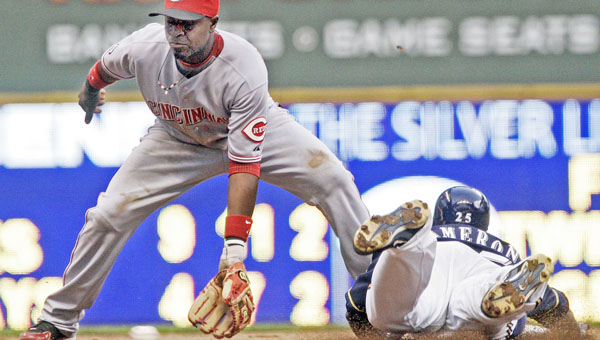 The Cincinnati Reds elected to exercise their option in 2012 to keep second baseman Brandon Phillips (above) but did not exercise their option on closer Francisco Corderoby allowing the relief pitcher to become a free agent. Cordero could stay with the Reds but he would have to accept a reduced contract. (The Ironton Tribune / MCT Direct Photos)

The Reds also lost left-hander Matt Maloney, who was claimed off waivers by Minnesota on Monday.

Phillips batted .300 with 18 homers, 82 RBIs and six errors last season, when he became an All-Star for the second time. The two-time Gold Glove winner finished second to Pittsburgh’s Neil Walker in fielding percentage by a second baseman. Cincinnati picked up his $12 million option and is trying to negotiate a multiyear deal.

“We’re going to continue to talk about extending him long-term if possible,” general manager Walt Jocketty said in a phone interview.

Jocketty said the Reds basically had to decide between keeping Phillips or Cordero, given their payroll constraints. The Reds decided to pay a $1 million buyout to Cordero, who becomes a free agent but could stay with Cincinnati if he’s willing to take a reduced contract.

“We have a lot of tough decisions we’ve had to make this offseason going forward,” Jocketty said. “We’ll continue to talk with (Cordero). This also gives him an opportunity to see what the market is like.”

Cordero signed a four-year, $46 million deal with the Reds after the 2007 season as a free agent from Milwaukee. He saved 34, 39, 40 and 37 games in each of those four seasons. Only two other Reds had a save last season — Nick Masset and Aroldis Chapman with one apiece.