Getting ready for spring’s beauty 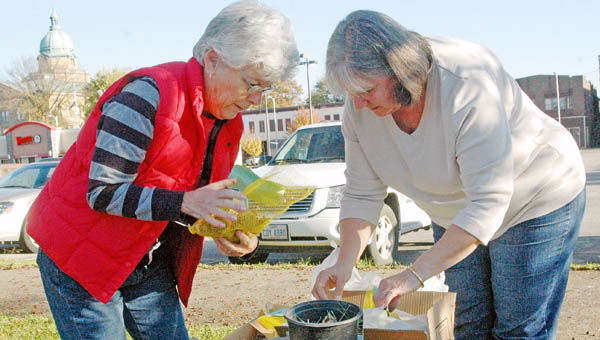 Ironton In Bloom members Carol Allen, left and Juanita Dalton sort through bulbs being planted in a traffic island along Railroad Street Tuesday.

Tuesday afternoon, they were humble bulbs, plain and brown, but next spring, they will be explosions of color poking through the thawing soil on a traffic island near the intersection of Railroad and Second streets.

Members of Ironton In Bloom spent the afternoon planting 500 grape hyacinths, paper whites and daffodils bulbs, all of which were donated to the group to beautify the city.

“When we sold bulbs, we asked if anyone wanted to donate bulbs back to us and nine people donated in that fashion,” Ironton In Bloom President Carol Allen said. “We got some from the highway department that were in an empty lot near where they’re going to build the new bridge. The Rock Hill Garden Club donated some bulbs and three private citizens donated as well.”

This is one of several projects throughout the year the organization undertakes to beautify the city. Ironton In Bloom was organized four years ago. It is an all-volunteer organization.

SP church may have to vacate

SOUTH POINT — A South Point church located inside a former elementary school may be displaced in the latest development... read more