Vesuvius bridge to be replaced next year 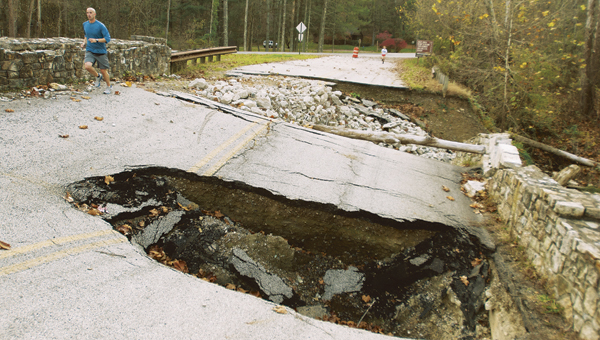 Pedestrians make their way around the gaping holes on the old Lake Vesuvius bridge Wednesday evening at Lake Vesuvius. The bridge was damaged during one of the many floods the area experienced in 2010.

PEDRO — A Lexington, Ky., firm has been awarded the contract to replace the historic bridge at the entrance of Lake Vesuvius Recreational Area.

Massive rains in July 2010 washed out the structure at the lake’s entrance on County Road 29, off State Route 93. In late fall of 2010, a temporary steel structure was erected downstream of the location of the original bridge to accommodate area residents who use the road as a major thoroughfare.

The original bridge was a Civilian Conservation Corps project built in the 1930s. It was widened in 1990 and featured two spans whose supports were secured in the creek bed. However the new design will have a single span to prevent debris from getting caught up in the structure.

Changing the design was a consensus among the county engineer, forest service engineers and the Federal Highway Administration, who is funding the project entirely.

Expected cost was between a half-million to a million dollars.

Bluegrass Contracting presented a bid of $985,430 for the project.

“The next step is to schedule a pre-work meeting,” Cindy Henderson of the forest service, said.

The meeting is to determine what portion of the project can be completed prior to winter, she said.

“It is not going to be completed (this year) with the asphalt plant shutting down this month,” Henderson said.

Work is to be completed within six months after the pre-work meeting.