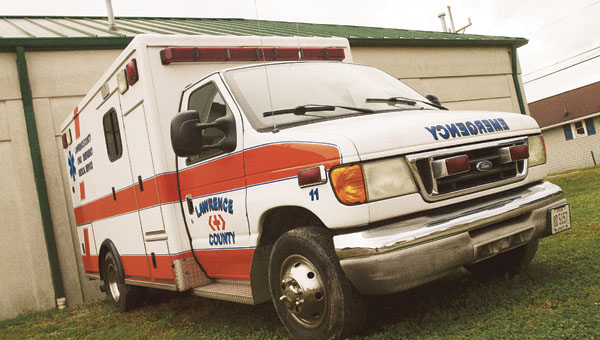 It’s a fact, but not a finding. That seemingly semantical difference has slowed the county in getting more than a quarter-million dollars the state auditor says it is owed.

In May, State Auditor Dave Yost released an audit of the now defunct Southeast Ohio Emergency Medical Service district that had served Lawrence, Athens and Jackson counties for more than three decades. According to Yost, SEOEMS owes Lawrence County a refund of $301,396.

When County Commission President Les Boggs attempted to recoup the money during a June SEOEMS board meeting, he was thwarted by a majority vote of the board. The commissioners then went to the county prosecutor’s office who asked Ohio Attorney General Mike DeWine to intervene.

At its regular Thursday meeting, Boggs said that DeWine needs more information before he could possibly assist in the collection of the money.

“It is a technicality,” Boggs said. “Because it is not listed as a finding (for recovery) he needs further information of contract between the county and SEOEMS.”

Pursuing that or asking Yost to amend his audit report could be possible options, the commissioner said.

“We could ask the state auditor to revise the audit to list it under findings,” Boggs said. “They listed it as a fact so I don’t see why not. In my opinion, it would be a lot easier.”

However, the county would have to provide documentation before that could happen, according to a spokesperson for Yost’s office.

Boggs said the county would continue to pursue the collection.

“We owe it to the taxpayers,” he said.

County Treasurer Stephen Burcham reported that as of Wednesday the county has $4.1 million in cash on hand.

“That is a little better than at this time in other years,” he told the commissioners.

The most recent Certificates of Deposit to come due were re-invested at an interest rate of .70 percent. Those three — each with a face value of $500,000 — had been invested at a 5 percent interest rate. But with the economic downturn those rates are no longer possible, he said.

According to the Ohio Revised Code, Burcham can only invest the county’s funds in Ohio banks.

“One time years and years ago banks used to only operate within the state boundaries,” Burcham said after the meeting. “Now banks are multi-state. When the Ohio Revised Code came into existence, you had a state bank.”

The treasurer could also purchase brokered CDs from stock brokers.

“But we would have to pay a higher fee to pay the broker,” he said. “That would offset the rate.”

In other action the commissioners:

• Received the weekly dog warden’s report where 23 dogs were destroyed; seven were sold and four were redeemed by their owners. There were 207 dogs in custody this week.