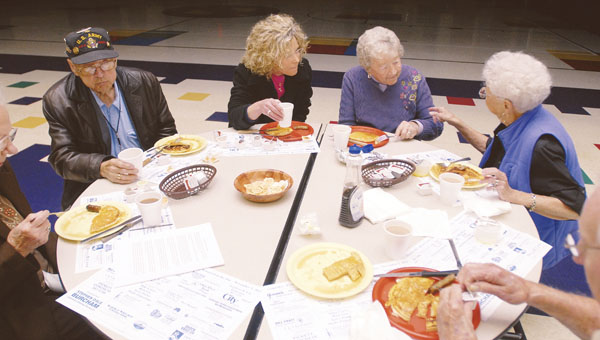 CHESAPEAKE — Pancakes cooked by members of the Chesapeake Proctorville Rome Lions Club were on the menu Saturday morning at Chesapeake Elementary School.

“This is one of our major fundraisers of the year,” said Hall, listing the organizations other signature events. “We have this, the Chesapeake Proctorville Rome Lions Club track meet and we have an Oktoberfest.”

Hall said the club hopes to raise several thousands dollars to be used to help underprivileged community members with eye exams and glasses as well as hearing aids and workplace eye protection.

“Anything we can do for the community. We try to raise funds to help the communities we serve. Our motto is we serve,” said Hall.

“The Lions Club is the largest social services organization in the world, it has over 1.5 million members. We’re out there to help. If anyone knows of someone who needs help with eye exams or hearing aids or eye protection. We’re here to help in anyway we can. We are always looking for people to help in the community,” he added.

Just after 9 a.m. Hall said turnout had been steady throughout the morning keeping the approximately 15 Lions Club members who volunteered to cook, serve and wash dishes, busy. Families, groups of friends, candidates stumping for last minute votes, community members and business leaders were among those who enjoyed the hearty breakfast and conversation Saturday morning.

Liesl Oberly, was enjoying breakfast with her mother, Barbara Oberly, and their friend Linda Meyers, the wife of a Lions Club member.

“It was delicious, we had a great time,” said Meyers, adding club members enjoy a great fellowship with one another, which makes its events even more fun.

Michelle Nida brought her three children and a couple of their friends to enjoy the breakfast her father-in-law helps to serve.

“They like to come, they like to see their friends and eat the pancakes. They are good!” said Nida.

“The sausage is good. The pancakes are good. Everything is good,” he said.

“It’s an annual thing that I think people are familiar with and look for in early November,” added Hall.

“We’ve had a great turnout and support from the community today. We enjoy hosting this because it gives people an opportunity to come and sit and have food with somebody they don’t necessarily see everyday and in some cases is their neighbor. You can sit down and have a conversation in a relaxed atmosphere,” said Gilpin.

The Chesapeake Proctorville Rome Lions Club has approximately 60 members and meets twice monthly at the Giovanni’s in Chesapeake. Meetings are at 6:30 p.m. on the first and third Tuesday of the month. New members are always welcome.

Hall, and Gilpin along with longtime Lions member Paul Hart said the group is particularly in need of younger members.

Hart said the organization has a program called Leos, which mentors school-age children helping them through school with the hope they will eventually become full-fledged Lions Club members.

It’s a fact, but not a finding. That seemingly semantical difference has slowed the county in getting more than... read more