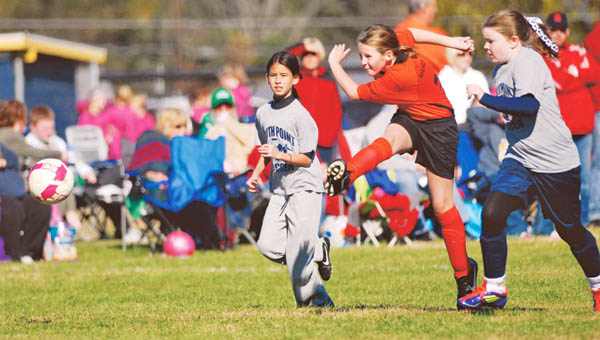 A member of the Tigers’ girls soccer team sends the ball flying down the field during the annual Kickin’ for a Cure IV tournament. Teams from Lawrence and Scioto counties and from West Virginia and Kentucky participated in the event to help support the St. Mary’s Breast Center fund in Huntington, W.Va.

Kickin’ for A Cure was Saturday

Local youth soccer teams engaged in friendly competition Saturday while uniting for a cause.

Still the cause was not lost amongst participants. Several players wore commemorative clothing such as shirts, bows and socks. Some of the players even spray painted their hair pink.

“The community gets together for this. A lot of families have been affected by the disease,” G.W. Rea, board member for the South Point Soccer League, said.

The disease particularly hits home for Chris Smith, president of the league. His wife Tracy is a breast cancer survivor. Smith decided to organize the tournament to raise awareness and help other families dealing with breast cancer.

“My mother-in-law passed away from cancer,” Rea said. “So it has affected my wife and I along with several other families.”

A portion of the proceeds from the tournament will go to St. Mary’s Medical Center. A Nintendo 3Ds and a 32-inch flat screen TV were raffled off.

A silent auction was also held. The proceeds from the auction will go to South Point kindergartener Beth Brown and her family.

Brown has been battling leukemia. Some of the items offered included three area rugs, candy and movie baskets, a fall decoration themed basket and a tool gift set.

Business damaged after being struck by car

Brake failure is said to be the cause of an accident Friday afternoon that sent a car through a South... read more