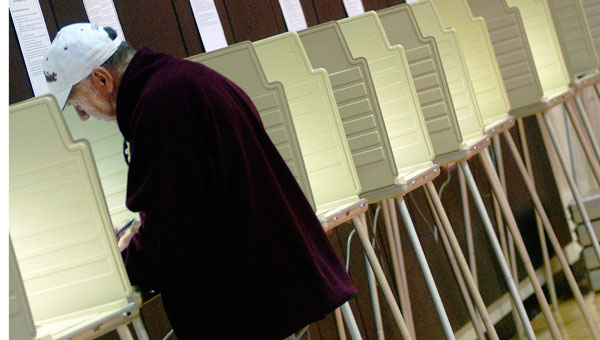 Ironton resident Steve Dodgion is in the booth Tuesday casting his vote as part of the Election Day process.

The candidates have campaigned and the issues have been debated, but the majority of eligible voters in Lawrence County just might stay home, board of elections officials are predicting.

Lawrence County Board of Elections Deputy Director Eric Bradshaw said voter turnout is still “up in the air,” but he didn’t anticipate a rush to the polls.

“I don’t think it’s going to be very large, maybe in the low 20s,” Bradshaw said. “The one thing that may change that is a lot of Issue 2 people going out to vote.”

On the other hand, Bradshaw said some people are so fed with the political gridlock in Washington, D.C., their distaste for politics both Democrat and Republican, will keep them home.

While the lines may be short at polling places, Bradshaw said that office had processed — handed out or mailed — applications for 5,000 absentee ballots. He said he did not know how many had been returned. Ballots postmarked by Monday will be accepted and counted, Bradshaw said.

There are 137 candidates vying for mayor of Ironton, Hanging Rock, Ironton, Coal Grove, South Point, Chesapeake, Proctorville and Athalia and well as council seats in all those municipalities, school board and township races.

County to pay tribute to veterans