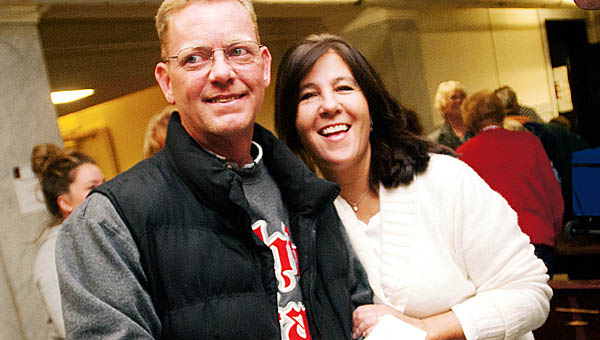 Mayor Rich Blankenship, seen with his wife Carla, spends a little time at the Lawrence County Courthouse as he is greeted and congratulated by supporters following the results of the 2011 election.

“I’m very thankful the citizens trusted me to lead the city forward another four years,” Blankenship said during a brief visit to the Lawrence County Courthouse once the Ironton tally was complete. “I promise to work as hard for them as I have before. I think the city is moving forward and I am anxious to keep it moving forward.”

Calls were placed to Cleary’s cellular telephone and Wentz’s home telephone. Those calls were not returned as of press time.

In the city council race, incumbent Kevin Waldo led the ticket with 2,195 votes, followed by newcomers Aaron Bollinger with 2,069 votes and Philip Heald with 1,501. Each of them will fill the three available seats on council. Sitting councilman Frank Murphy placed fourth with 1,268.

Bollinger said he was excited and glad the voters elected him.

“I really do have a lot of concerns for the city and I will do all I can to help the citizens of Ironton,” Bollinger said. “I want to prove to the community everything I said. I do have a genuine love for this city.”

It was 59 minutes and counting before the polls closed and Nicholas Maines had the confidence of a man who... read more