Vikings hope line is an advantage against Beallsville 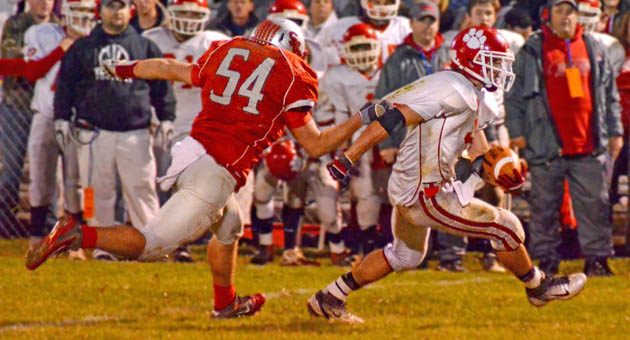 WILLOW WOOD — Does size matter? The Symmes Valley Vikings are about to find out.

The Vikings will have a decisive size advantage up front as they play the Beallsville Blue Devils at 7 p.m. on Saturday in the Division VI Region 23 semifinals at Athens High School.

However, head coach Rusty Webb doesn’t know for sure what the size advantage will mean until they line up and play.

“They’re not very big, but they are quick and they get after it,” said Webb. “They’re very good at what they do. They’ve been undersized all year and it hasn’t bothered them.”

Beallsville (9-2) uses basically the same players on the offensive line that they use on defense.

“The thing you can’t see is their strength. They’re strong kids,” said Webb.

The Blue Devils rely on the passing of quarterback Teryn Jarrett and the running tandem of fullback Grahamm Dauch and tailback Brandyn Heath.

Dauch has 757 yards on 117 carries and 12 touchdowns despite missing the first game of the season.

The top receiver is tight end Ricky Turbaugh with 32 receptions for 572 yards and six scores. Matt Burke has 27 grabs for 393 yards and four TDs.

“They’re a very balanced team on offense and they’re very athletic. They run the ball well and their backs run hard. They’re very similar to Trimble but they do it out of a different formation,” said Webb.

Of course, the Vikings aren’t just size. They have plenty of speed and skilled players of their own.

Alec Herrell has 1,214 yards on 123 carries and 10 touchdowns to lead a balanced backfield.

Beallsville will try to stop the Vikings’ offense with a defense led by Groves, Heath and Thompson.

Groves had 12 sacks, Thompson has seven sacks and Heath had four interceptions, four sacks and three forced fumbles from his linebacker spot.

The teams have one common opponent after the Blue Devils played Sciotoville East last week in the first round of the playoffs.

The winner advances to the regional finals to play the winner of Zanesville Rosecrans and New Washington Buckeye Central.