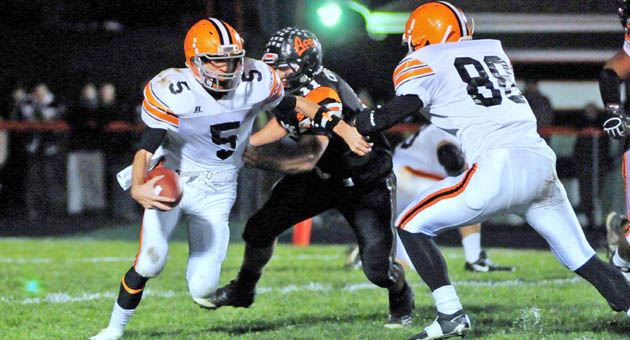 This one-two punch is quite a knockout.

The running tandem of tailback Ross Franklin and quarterback Matt Smith have been too much for Johnstown-Monroe opponents this season, and they Johnnies duo will now be the focal point of the Ironton Fighting Tigers’ defense.

Johnstown is 11-0 thanks to an offense that is averaging 477 yards per game in total offense including 419 on the ground. The Johnnies have not scored fewer than 34 points in any game this season.

That explosive offense will be a big challenge for Ironton when the teams meet a 7 p.m. Saturday in the Division IV Region 15 semifinals at Hamilton Township High School.

Franklin — the Central District offensive player of the year — has 2,577 yards rushing on 241 carries for a 10.7 yards per carry. He has scored an amazing 40 touchdowns running and one receiving.

But there is more to the Johnnies than just Franklin and Smith.

While the Johnnies don’t need to throw much, they are effective when they do. Tyler Thompson has 11 catches for 168 yards, Nick Sadinsky has six receptions for 206 yards and two touchdowns, Drew Dague three grabs for 120 yards and a score, Bailey Duncan three catches for 95 yards and a TD and tight end Harley O’Flaherty five receptions for 82 yards.

“You focus on the two backs, but they have a lot more skilled players than them and they can hurt you. It makes it tough to defend,” said Lutz.

Ironton (7-4) was able to run for 31 yards last week in a 12-9 win over Amanda-Clearcreek, but Lutz said things might be a lot tougher against the Johnnies.

“They’re not as big up front on defense, but they’re quick, aggressive and they move all over the place. They’re tough to block,” said Lutz.

The secondary has Connor Rehl (5-9, 131) and Thompson at the corners with Sadinsky the safety.

Smith is the punter and Preston Hiles is the placekicker.

Hollis was a first team all-district pick on offense while San Fillipo, Smith and Sadinsky were named to the defensive unit.

STATE COLLEGE, Pa. (AP) — The day was always coming. The old coach was 84, and each new season brought... read more