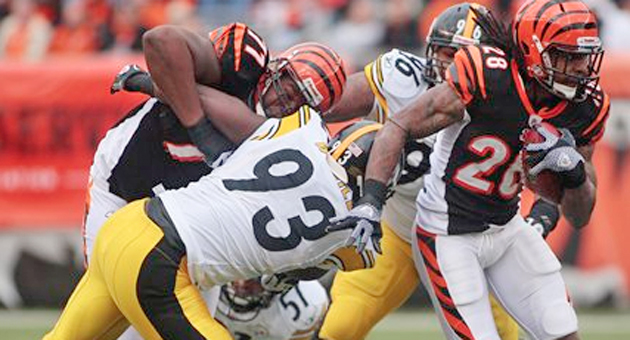 CINCINNATI (AP) — A rookie quarterback, a game on the line. No better time for the Steelers’ defense to get back to what it does best.

Rashard Mendenhall ran for a pair of touchdowns Sunday, and Pittsburgh intercepted Andy Dalton twice in the fourth quarter, holding on for a 24-17 victory over the upstart Cincinnati Bengals.

The Steelers (7-3) ended the Bengals’ five-game winning streak with a little vintage defense, something missing so far this season. The Steelers had only two interceptions and two fumble recoveries heading into Sunday’s game, a stunningly small statistic for these players who pride themselves on getting the ball.

They got it twice when it mattered most.

“We’re a great defense because of the way we play,” safety Ryan Clark said. “Turnovers tend to come in spurts. That’s what separates teams from being a great defense. Today, we were able to help us win it.”

It all came together in a game the Steelers badly needed. When Baltimore lost to Seattle 22-17 later Sunday, Pittsburgh was back atop the AFC North. Cincinnati and Baltimore are tied for second at 6-3.

Ben Roethlisberger led long, balanced drives while thousands of Steelers fans waved Terrible Towels amid the first sellout crowd of the season at Paul Brown Stadium. Mendenhall’s 9-yard run put the Steelers’ up 24-17 late in the third quarter, leaving it to the defense to finish the win off.

First, linebacker Lawrence Timmons picked off a deflected pass, ending a drive at the Pittsburgh 33. William Gay pulled off the clincher, stepping in front of Jerome Simpson for an interception at the 19-yard line with 2:27 left.

“It was two big plays that helped change the game,” linebacker James Farrior said. “It was awesome. I’m especially proud of William Gay. You guys and even some of our fans really got on him this week.”

Gay let Torrey Smith get behind him for a 26-yard touchdown catch with 8 seconds left in Baltimore’s 23-20 win at Pittsburgh last Sunday.

Dalton handled most of what Steelers defensive coordinator Dick LeBeau threw at him until the end. He had two more touchdown passes, giving him 14 overall — the most by a rookie quarterback in his first nine games since the AFL-NFL merger in 1970. He wasn’t sacked even though the Steelers blitzed him every way they could.

Until the fourth quarter.

Dalton didn’t have top receiver A.J. Green on the field for those pivotal moments. Green, who leads all rookie NFL receivers, twisted his right knee when he landed awkwardly on a 36-yard touchdown in the second quarter.

Green returned on the next series but was held out as a precaution after his knee tightened at halftime.

Roethlisberger was 21 of 33 for 245 yards with one touchdown and a deflected interception. He was sacked five times, matching his season high.

Roethlisberger found Jerricho Cotchery uncovered in the end zone for a 16-yard score that got thousands of Terrible Towels waving. It was the fifth time in the last six games that the Steelers reached the end zone on their opening possession.

Mendenhall ran 2 yards for a 14-0 lead on the Steelers’ next possession. At that point, Pittsburgh had a 132-8 advantage in yards.

Dalton brought the Bengals back by doing what he does best — throw the ball Green’s way so he can make a game-changing play. After running away from the pass rush, Dalton passed 36 yards to Green, who went up between safeties Troy Polamalu and Clark to make the catch in the end zone.

Then, the Steelers helped the Bengals keep it close.

Tight end Heath Miller bobbled a pass directly to cornerback Leon Hall for an interception that set up Mike Nugent’s 43-yard field goal, cutting it to 14-10. Miller had another bad moment late in the first half, wiping out an apparent touchdown with an interference penalty. Shaun Suisham’s 39-yard field goal gave Pittsburgh a 17-10 halftime lead.

Hall, the Bengals’ top cornerback, hurt his left Achilles tendon on that drive and didn’t return. He was on crutches after the game and went for tests that indicated he had torn the tendon, which will likely land him on a season-ending injury list.

Dalton pulled the Bengals even with a 1-yard touchdown pass to Gresham on their opening drive of the second half. Pittsburgh went no-huddle and pulled off the winning drive, covering 81 yards in 11 plays.

Notes: Pittsburgh has won eight of its last nine in Cincinnati. … Roethlisberger is 7-1 in his career in Cincinnati. … Mike Tomlin got his 50th regular-season victory, joining former Steelers coaches Chuck Noll, Bill Cowher and Raymond “Buddy” Parker in that category. … Dalton has thrown for 1,866 yards, passing Greg Cook for the franchise record by a rookie. … Bengals coach Marvin Lewis said Hall would be evaluated further to determine the extent of his Achilles injury.

CLEVELAND (AP) — When Phil Dawson trotted onto the field, the Cleveland Browns seemed moments from victory. In a snap,... read more