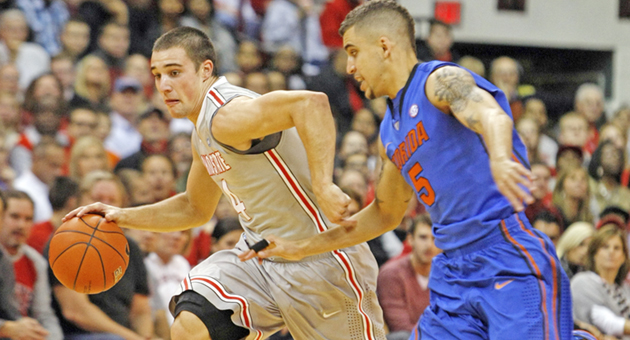 COLUMBUS (AP) — Florida was hitting 3-pointers and the crowd was surprisingly quiet. It was a telling moment for Ohio State.

“It seemed like it was going to be a long night,” Buckeyes guard Aaron Craft said.

But with William Buford scoring 21 points, No. 3 Ohio State survived the seventh-ranked Gators’ quick start for an 81-74 win on Tuesday night.

Jared Sullinger added 16 points, Deshaun Thomas scored 15 and Craft had 13 points and seven assists for the Buckeyes (2-0), who forced 16 turnovers and hit 27 of 34 free throws to lead by double figures for most of the final 20 minutes.

“I didn’t know how we were going to play tonight,” coach Thad Matta said of his team, which has just one senior (Buford) and one junior. “During the drive in the morning I was saying, ‘What if? What if?’ But I thought we played with good composure. They knocked us early by making shots and our guys did a nice job of continuing to play and weathering the storm.”

Freshman Bradley Beal had 17 points, Kenny Boynton 15 and Patric Young and Erik Murphy 14 apiece for the Gators (1-1), who have never beaten a top-3 team in a true road game. Down as much as 16 points, they got as close as five with under a minute left before Buford sealed it with two foul shots.

“Obviously, we got off to a really good start, which I think you want to do on the road,” Florida coach Billy Donovan said. “The difference was our defense in the first half was really, really good. For a period of time there, shots were not going in for us and we needed to have a better resiliency in terms of understanding that we have to go back and play defense.”

The game matched teams that won their conferences a year ago but were trying to replace three lost starters.

One of the new starters for Ohio State is Craft, a sixth man as a freshman last season who usually ended up playing 35 minutes a game. Donovan said the difference in the game was the pesty Craft.

“Clearly he dominated the game from start to finish,” he said. “He was the whole key. He physically manhandled our guys — steals, strips, loose balls and drives.”

With Sullinger controlling the lane, Buford scoring from both outside and inside, and Craft seeming to get a hand on every Florida pass and have a hand on every Ohio State assist, they pulled away.

“We did a good job adjusting as a team and getting it under control,” Craft said.

Ohio State scored the first five points of the half for an eight-point edge and never let the Gators cut into the lead until the final minute.

Still, Sullinger picked up his third foul with 13:58 left and soon after headed to the bench. With Evan Ravenel filling in and Buford and Craft setting the pace on offense, the Buckeyes didn’t blink at the loss of their preseason All-American.

“Their guards are just terrific,” said Beal, a national high school player of the year last season. “From Aaron Craft on to Buford and all the others, they all contributed.”

A rested Sullinger then returned to the lineup.

The foul line helped the Buckeyes maintain their advantage the rest of the way. Florida was just 13 of 21.

“Florida stung us early,” Matta said. “As young as we are, we were constantly making adjustments out of timeouts. We kept playing and offensively we did a better job of executing. We did not play perfect. I told the coaches, we’re going to look at this and there’s a lot of things we have to learn. But for our program, we beat a great basketball team tonight.”

Ohio State has won eight of the 12 meetings, but the Gators captured the big one. They beat the Buckeyes 84-75 to clinch their second straight national championship on April 2, 2007.