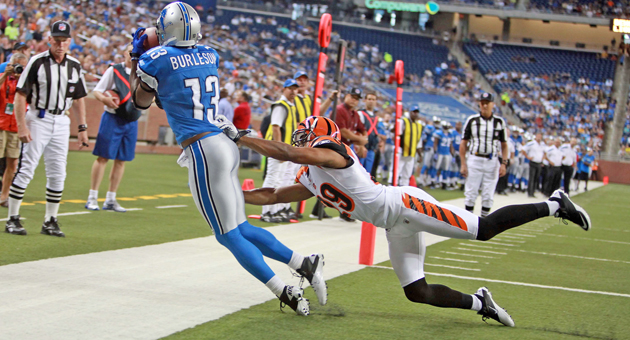 Cincinnati Bengals’ defense back Leon Hall defends against the Detroit Lions’ Nate Burleson (13) during a preseason game at Ford Field in Detroit, Michigan, in August. Hall was injured on Sunday and has been lost for the season. (The Ironton Tribune / MCT Direct Photos)

CINCINNATI (AP) — Long after the rest of the Cincinnati Bengals had left the locker room on Monday, cornerback Leon Hall emerged on a pair of crutches, his left foot protected by a white medical boot.

He couldn’t believe his season was over.

The Bengals put Hall on injured reserve Monday with a torn Achilles tendon in his left leg, ending his streak of playing in all 74 games since he was a first-round draft pick in 2007. Hall said he’d never missed a game in high school or at Michigan because of injury.

“I don’t know how to deal with this type of situation,” Hall said, stopping to talk to three reporters as he left the trainer’s room. “I don’t know if there’s a right or wrong way. I don’t know if it’s totally hit me yet, just considering I haven’t had an injury before.”

The Bengals (6-3) have lost their most durable cornerback heading into a pivotal game.

Hall got hurt as he planted his foot and changed direction just before halftime of the Bengals’ 24-17 loss to the Pittsburgh Steelers on Sunday. Tests after the game found he’d torn the tendon from the bone.

Hall didn’t think it was a bad injury when it happened. He’ll have surgery later this week.

“I just planted and drove and it kind of felt like somebody had kicked me, but nobody was around me,” Hall said.

The Bengals promoted cornerback Brandon Ghee off their practice squad to take his place. Ghee, a third-round pick in 2010, played in six games last season on special teams.

Cincinnati has lost both of its starting cornerbacks from last season. Johnathan Joseph left as a free agent for Houston and was replaced by free agent Nate Clements. Hall’s injury leaves the Bengals relying on untested players.

“I wouldn’t describe it as devastating,” defensive backs coach Kevin Coyle said. “As you go through the season, this kind of thing happens throughout the league. It’s disappointing. He’s been our iron man. He hasn’t missed a game. When other guys have been nicked up, he’s been able to play somehow.”

Adam “Pacman” Jones, who was the No. 3 cornerback last season before he hurt his neck, has missed the past two games with a pulled hamstring. He’s expected to practice this week.

“We’ll see how he progresses here during the course of the week, but Adam certainly would really help us as soon as we can get him back in the swing of things and back into the rotation,” Coyle said.

Pittsburgh’s victory, combined with Baltimore’s loss at Seattle, left the Steelers atop the AFC North at 7-3 heading into their bye week. The Ravens and Bengals are tied for second at 6-3. The winner of their game next Sunday in Baltimore will move into a tie with Pittsburgh.

The Steelers secured the win Sunday at Paul Brown Stadium by intercepting rookie quarterback Andy Dalton twice in the fourth quarter. William Gay’s interception at the Pittsburgh 19-yard line with 2:27 to go essentially finished it.

A.J. Green, who leads NFL rookie receivers in most categories, wasn’t on the field for the decisive plays in the second half. He hyperextended his right knee while making a touchdown catch in the second quarter. The knee tightened at halftime, and he was held out as a precaution.

Coach Marvin Lewis said on Monday that Green “should be fine” for the game in Baltimore.

The Bengals’ outside passing game struggled after Green got hurt, showing the rookie’s importance. Jerome Simpson and Andre Caldwell had eight passes thrown their way in the second half. Simpson didn’t have a catch, while Caldwell had three for only 25 yards.

“We’ll find a way to get through it,” Coyle said. “Good teams do, and I think we have a good team. We’ll figure out a way to make it happen.”

Notes: Dalton needs to keep throwing touchdown passes at a steady rate to keep pace with the NFL’s rookie mark. He has 14 through nine games, the most by a rookie since the 1970 AFL/NFL merger. The rookie record for 10 games is 15 TD passes, shared by Dan Marino and Peyton Manning, according to STATS LLC. Manning holds the single-season record for a rookie with 26 touchdown passes in 1998. … The Bengals also placed rookie LB DeQuin Evans of Kentucky on the practice squad/injured list. Evans suffered a shoulder injury in practice on Nov. 9.

Lawyer says he stands behind emails to coach Tressel