Walking in a Winter Wonderland 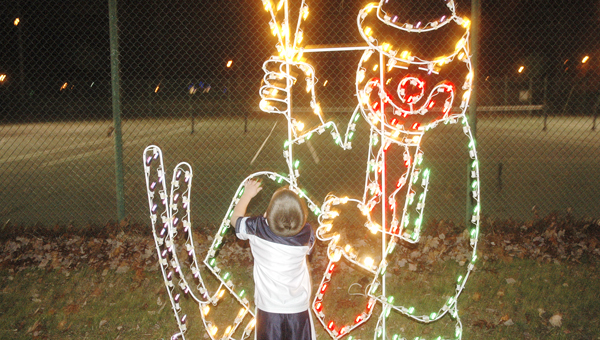 Logan Maynard, of Louisa, Ky., surveys a clown display at the Winter Wonderland of lights in Ashland, Ky. The annual event kicked off Monday evening and will continue through the holidays.

ASHLAND, Ky. — With a brass band, a church choir and a coterie of pretty young women, Ashland officials Monday night flipped the switch on its 23rd Annual Winter Wonderland of Lights in Central Park.

The event, which again made the list of the Kentucky Tourism Council’s Top 10 Winter festivals, is an extravaganza of holiday light displays arranged around the perimeter of the park and along Chattin Drive in the middle of the park.

WWOL Chairman Marion Russell said two new elves have been added this year to the toy factory; a new biplane has joined the festival offerings. In addition to the displays in the park, the city has added 33 new LED lights along Carter and Winchester avenues near the Ashland Town Center.

Russell estimated Winter Wonderland’s 50 displays includes more than 800,000 lights that must be assembled and ready before Thanksgiving each year. Russell supervises Ashland city workers and numerous volunteers to make it happen. It is a job Russell said he looks forward to every year.

“That’s the challenge,” Russell said. “To me, this is like Christmas Eve.”

Russell was honored during the ceremony for his more than two- decade commitment to WWOL.

“When I was a kid, I never grew up,” Russell explained. “This is my thing.”

An estimated crowd of 400 gathered at the John “Pops” Lewis Pavillion to see WWOL pageant winners flip the switch to turn on all those lights. Michael Reeves sang the National Anthem. The Ashland First United Methodist Church Chancel Choir, the Jeff Carter Group and the Kentucky Christian University Jazz Band provided musical selections. Afterward, families strolled along the sidewalks taking in the first glimpses of WWOL 2011.

Among them was four-year-old Logan Maynard, of Louisa, Ky., with his mom, Kayla and baby brother, Bentley, who is seeing WWOL for the first time — he’s seven months old. What brought the Maynard family from Louisa to Ashland?

“He wanted to see the lights,” Mom mused as Logan sized up a colorful clown.

The Ashland Christmas Parade is 7 p.m. Nov. 22. The grand marshal this year is U.S. Congressional Medal of Honor winner Ernie West, of nearby Wurtland, Ky.

The Winter Wonderland of Lights will continue through Jan. 5. There will be visits with Santa 6-8 p.m. Nov. 24-27, Dec. 2-4, 9-11 and 16-18 at the Central Park Log House. The Winter Wonderland Express train rides will be at the same time and embark from the same location. The cost is $3 per person.