Buckeyes more concerned with own problems 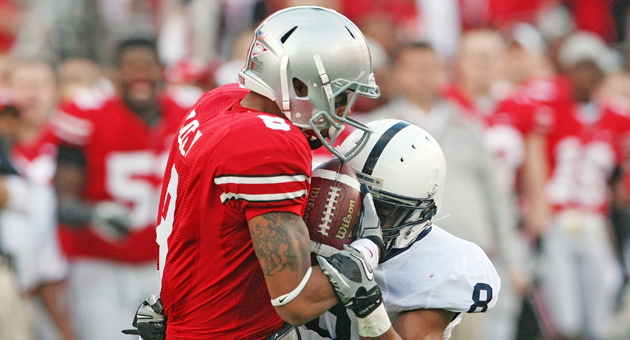 Ohio State’s passing game will get a boost this week with the return of wide receiver DeVier Posey (left). Posey is shown making a catch against Penn State last season. Ironically, Posey will return from his NCAA suspension against the same Nittany Lions. (The Ironton Tribune / MCT Direct Photos)

COLUMBUS — Everybody’s got a solution for what ails Ohio State.

Interim coach Luke Fickell said he was grilled by fans at a meeting with a booster group this week.

“Sorry about that,” he said after he showed up a few minutes late for his weekly news conference. “The Quarterback Club had a lot more questions today.”

One persistent member of that club wanted to know why the Buckeyes only run on first and second downs and only throw on third.

“He told me when he was coaching high school, ‘We threw it on first, threw it on second and then ran draw plays on third and it was really successful,”’ Fickell said. Then he added, “If Penn State’s listening, that might be our game plan.”

There are plenty of problems for players, coaches and fans to address.

The Buckeyes (6-4, 3-3 Big Ten) got off to a miserable start, showed rare flashes of being able to move the ball, but ultimately fell 26-23 in overtime at Purdue on Saturday. Now they have to address all the things that went wrong, and some that have been going wrong all year, before taking on the 21st-ranked Nittany Lions (8-2, 5-1) on Saturday in their home finale.

The No. 1 problem facing the Buckeyes is an offense — particularly a passing game — that has had great difficulty making plays.

Purdue dared the Buckeyes to throw the ball. And they couldn’t.

“A lot of it has to do with where they’re at with the quarterback position,” Boilermakers coach Danny Hope said after the game. “Even though (Braxton Miller) is a very talented quarterback, he’s a freshman, and normally a freshman quarterback can’t come out there and manufacture a passing offense.”

As a result, the Boilermakers crowded the line with eight or nine defenders and matched up with any receivers. As a result, Ohio State was limited to 166 yards on the ground — 101 yards fewer than it had averaged over the previous four games.

Miller was 8 of 18 passing for 132 yards and two touchdowns.

“You’ve just got to be able to make a few yards and rely on some of those guys up front even if they are putting in the extra guys,” Fickell said. “Obviously there are a lot more questions. We all know. We’ve said it a million times: Balance has got to be the key. We’ve got to create and find some more of that whether it’s throwing it or screening it or drawing it like the guy from the Quarterback Club said.”

Fickell said one of the problems is that receivers aren’t getting open. The return of DeVier Posey might solve that.

Posey has had two different NCAA suspensions — both for accepting improper benefits, first from a tattoo-parlor owner for signed memorabilia and the second for being overpaid for a summer job — totaling 10 games. He returns to the Buckeyes just in time to play in his final game at Ohio Stadium.

His loss has been felt more than anyone might have guessed. He was the second-leading receiver last year with 53 catches for 848 yards and seven touchdowns. All of this year’s wide-outs — in 10 games — have combined for 46 catches for 745 yards and five touchdowns.

Posey also brings a level of consistency, something sorely lacking in the receiving corps. He has caught a pass in 27 consecutive games.

But Fickell wasn’t ready to declare Posey a starter.

“I don’t know yet. We’ve got to go out there and see how that whole thing works out,” he said. “He’ll have an opportunity. We’ll see how practice goes, and we’ll see as we get closer to get game time.”

Ohio State is also dealing with problems on defense — opposing teams have converted on 53 percent of their third-down plays over the last two games — and special teams. It was a blocked extra-point kick in the final minute that allowed Purdue to force the overtime.

Fickell is confident the Buckeyes can bounce back from their latest defeat. He said they were upbeat when they showed up at the football facility the day after the game.

Nothing settled yet in Big Ten

The Associated Press   Nothing is settled in the Big Ten with two weeks remaining in the regular season. Michigan... read more