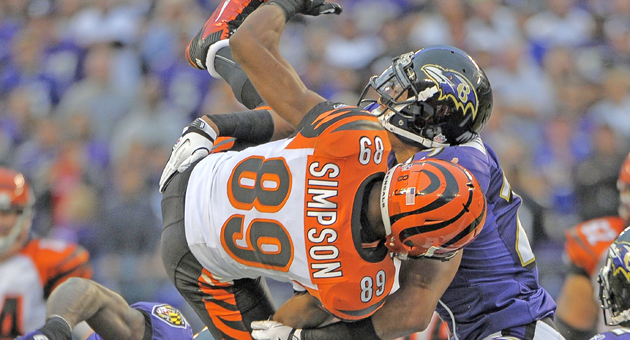 BALTIMORE — An uncharacteristic performance by the Baltimore Ravens defense was offset by an uncommonly effective outing by Joe Flacco and the team’s oft-criticized offense.

Flacco threw for 270 yards and two touchdowns, rookie Torrey Smith had six catches for 165 yards, and Baltimore moved into first place in the AFC North with a nerve-racking 31-24 victory over the Cincinnati Bengals on Sunday.

Playing without middle linebacker Ray Lewis for the first time in 58 games, the Ravens (7-3) nearly blew a 17-point lead in the final 14 minutes, yielded 483 yards and let rookie quarterback Andy Dalton throw for 373.

But Baltimore got 104 yards rushing and two touchdowns from Ray Rice, and the defense made big plays when it counted most. After Rice was stuffed on a third-and-1 with just over two minutes left, he remained confident.

“I just looked at the clock and I said, ‘Our defense will get it done,”’ he recalled. “That’s the faith I have in our guys.”

Even without Lewis, who watched from the sideline after being placed on the inactive list with a toe injury. The Ravens’ spiritual leader and leading tackler saw his unit pick off three passes and turn in a game-saving goal-line stand in the final minute.

Down 31-24, Cincinnati reached the Baltimore 7 before Terrell Suggs collared Dalton, who was called for intentional grounding. On fourth-and-goal, Dalton was sacked by Pernell McPhee.

The Bengals (6-4) needed seven points because on the previous series, an apparent 9-yard touchdown pass from Dalton to Jermaine Gresham was overturned by a replay that determined the receiver didn’t hold onto the ball at the end of a juggling catch.

The Bengals settled for a field goal with 5:32 remaining.

“When the receiver went to the ground, he had the ball in his right hand,” referee Ron Winter said. “The ball touched the ground and his hand came off the ball.”

Baltimore is locked in a first-place tie with Pittsburgh in the AFC North, but the Ravens own the tiebreaker by virtue of their two wins over the Steelers.

The Ravens won in part because of Smith, whose 165 yards were third-most by a receiver in Ravens history. He might have had more if Adam Jones didn’t grab hold of Smith’s long dreadlocks at the end of a 28-yard completion in the second quarter.

Jones was initially flagged for a horse-collar tackle, but officials corrected themselves and did not mark off any yardage because it’s legal to tackle a runner by pulling his hair.

Even though it wasn’t a banner day for the Baltimore defense, its three interceptions set up two touchdowns.

“Whenever we can get turnovers, it definitely makes everybody’s job easier,” cornerback Cary Williams said. “It’s just being able to capitalize on opportunities, and we did that today.”

Dalton went 24 for 45 with a touchdown. Cincinnati was without standout rookie wide receiver A.J. Green, who hurt his right knee a week earlier in a loss to Pittsburgh.

But the Bengals gave Baltimore all it could handle.

“We’ve won six games to this point and we’ll win some more,” coach Marvin Lewis said. “We’ve just got to circle the wagons, lick our wounds and go.”

One week earlier, the Bengals came up short in rallying from a 14-0 deficit against Pittsburgh. It was more of the same against the Ravens.

“It comes down to the fourth quarter. That’s how every game’s been for us,” Dalton said. “We’ve got to start faster. We can’t wait around until the end of the game to pick it up, come out and get back in it. It’s definitely going to be a focus for us.”

Baltimore took a 24-14 lead on a 2-yard run by Rice late in the third quarter. The score came after Ravens rookie cornerback Jimmy Smith picked off a pass and returned it 16 yards before fumbling. The loose ball was recovered at the Cincinnati 2 by teammate Brendon Ayanbadejo in a pile that included Winter.

The Bengals’ following possession ended with an interception by Lardarius Webb. On the next play, Torrey Smith split the Bengals’ two-deep zone and caught a 38-yard touchdown pass in the back of the end zone to make it 31-14.

The Bengals responded with a five-play, 80-yard drive capped by a 49-yard touchdown pass from Dalton to Andre Caldwell, who slipped behind Jimmy Smith down the right sideline.

But the Ravens held on, rebounding after a 22-17 loss at Seattle last week. Baltimore has won 12 straight following a defeat.

“It’s good to bounce back,” Suggs said, “but let’s not take any more steps back.”

The Bengals punted six times in the first half, two short of their season high for an entire game. Cincinnati’s offense managed only 143 yards before halftime, 47 of those on one play.

On the Bengals’ second possession, wide receiver Jerome Simpson made a juggling catch for a 47-yard gain to set up a 7-yard touchdown run by Cedric Benson.

The Ravens didn’t get past midfield until early in the second quarter, following a 15-yard punt by Kevin Huber. Starting at its 45, Baltimore picked up a first down before Flacco tossed a short pass to Anquan Boldin, who ran the final 20 yards for a 35-yard touchdown.

NOTES: Former Ravens kicker Matt Stover was inducted into the team’s Ring of Honor during a halftime ceremony. … Ravens LB Jarret Johnson made his 74th consecutive start, breaking the franchise record previously held by Michael McCrary and Jamie Sharper. … Baltimore has won seven straight at home and 15 of 16.