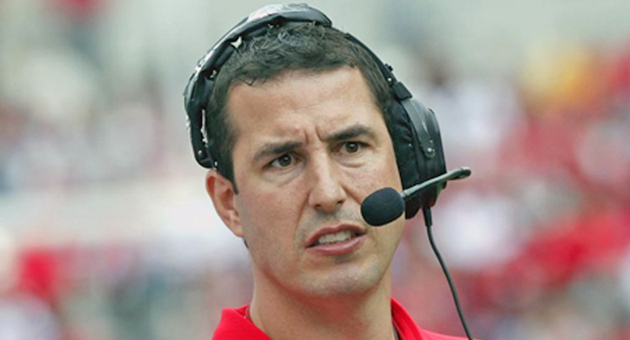 Luke Fickell will have his first head coaching experience in the Ohio State-Michigan game on Saturday. The former Buckeye will go against Michigan's first-year head coach Brady Hoke who is a former Michigan player. (The Ironton Tribune / MCT Direct Photo)

Now after consecutive losses, about all the Buckeyes (6-5, 3-4 Big Ten) have to play for is beating No. 17 Michigan — which would be no small accomplishment.

Interim coach Luke Fickell said the players are playing for each other as much as for anything else.

Already a virtual holiday for Ohio State fans, players and coaches, the game offers one last chance for the Buckeyes to rise above their troubles to ruin what has been a remarkable season for the Wolverines (9-2, 5-2).

That’s enough inspiration for just about everyone in scarlet and gray.

So beating their rivals is the very first objective.

“Any time you can win in Ann Arbor and win against Michigan, that speaks volumes in itself,” linebacker Andrew Sweat said. “That’s our goal. To beat Michigan.”

Sweat may not even play. He’s still recovering from a concussion sustained in the loss at Purdue on Nov. 12 and was held out of last week’s game, a 20-14 defeat to No. 21 Penn State in the home finale for the Buckeyes.

Ohio State is also playing for a winning record; the program hasn’t finished .500 since going 6-6 in 1999 under John Cooper. In addition, the Buckeyes can improve their lot if they are permitted to play in a bowl game.

The NCAA has yet to declare Ohio State’s final sanctions. Several players were suspended for accepting cash and tattoos from the subject of a federal drug-trafficking investigation. Tressel then was pushed aside after it was revealed that he knew of his players’ complicity but did not tell his superiors or the NCAA — contrary to his contract and NCAA rules.

Ohio State has had several subsequent violations and suspensions which have led the NCAA to issue a “failure to monitor” charge against the athletic department — the second-most serious charge that can be levied against a school.

After going before the NCAA’s committee on infractions in August, Ohio State has since received a second letter of allegations to which it has responded. The NCAA could rule any day whether it is enough that Ohio State has offered to vacate the 2010 season, pay back $339,000 in bowl revenue, go on two years of NCAA probation and surrender five football scholarships over the next three years.

With six wins, the Buckeyes are bowl-eligible. But the NCAA could issue a bowl ban for this postseason, or any future year.

Naturally, if allowed to play in a bowl, a 7-5 record might give the Buckeyes a better shot at warmer weather and a better opponent.

Another bit of motivation for the Buckeyes is that they have won the last seven meetings on the field against Michigan. Because it vacated the 2010 season, technically that streak (and the string of six straight Big Ten titles) ended when Ohio State accepted an 0-0 record instead of 12-1 for last season.

But the players do not acknowledge the vacated season. They say they beat the Wolverines 37-7 and that the streak’s still alive.

“You don’t want to be the ones to break the streak— you don’t want to be that team,” center Mike Brewster said. “I’ve already been on the team that’s not going to win the Big Ten championship for the first time in quite a while. If I can do anything to make this season right, it would be good to go ahead and continue the streak.”

Ohio State is also playing for its coaches. With speculation everywhere that former Florida coach Urban Meyer has already reached an agreement with the school to be head coach next year, several of the players said they wanted to win the game for Fickell and his staff.

“There’s been a lot of adversity,” Sweat said, pointing to the NCAA problems, suspensions and the five losses. “Coach Fickell is the greatest coach I’ve ever had. While everyone has their own opinion outside, I feel blessed to have the opportunity to play for a man that stands for what he stands for. He’s really made me a better man.”

Hoke made Buckeyes priority from day one