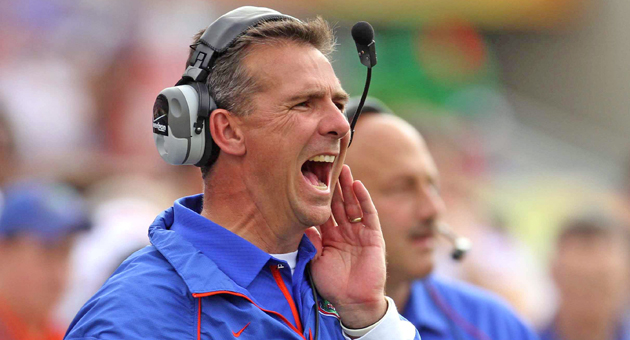 Former Florida head coach Urban Meyer is rumored to already have a signed contract to be the next Ohio State head football coach. (The Ironton Tribune / MCT Direct Photos)

Ohio State’s interim coach is preparing the Buckeyes for their biggest game of the season, a trek to The Big House to take on archrival Michigan.

On top of that, he’s fending off questions about his future. It is widely rumored that former Florida coach Urban Meyer has already reached an agreement in principle with Ohio State to take over the football program next season, although none of the major players in the drama is confirming anything.

“Maybe the good thing is at least we have this game to focus on,” center Mike Brewster said of the distractions swirling around the Buckeyes. “What happens after that, who knows? The younger guys I’m sure their heads are spinning a little bit. We hear stuff. We read everything. Who knows what’s true and what’s not?”

Fickell is working on a one-year, $775,000 contract as head coach. A native of Columbus and a lifelong fan of the Buckeyes, he has no real guarantees beyond this year.

As if that weren’t enough, he has also had to deal with looming NCAA sanctions, recruiting work and a likely trip to a bowl game.

Yet he says he tries to live a normal life — as normal a life as there can be for a 38-year-old husband and father of four small children while the weight of a state sits squarely on his shoulders.

“You live in a bubble, so to speak, in some ways,” he said. “(When) I get a chance to go home, if my kids are up, then I play with them. I spend time with my wife. I don’t turn the TV on. If it is on, it’s probably ‘Animal Planet’ or something that the kids are watching. And you just try to get yourself away for a few minutes.”

He took the job on an interim basis before Jim Tressel had even stepped aside. Ohio State learned last December that several football players had gotten cash and tattoos from the focus of a federal drug-trafficking probe.

It was later determined that Tressel knew about the NCAA violations, didn’t tell his bosses, lied on a compliance form and then played ineligible players throughout the 2010 season.

Tressel was suspended for two games, then five, then eventually forced to resign on May 30. Fickell, a defensive assistant coach at his alma mater where he started at nose guard for four years, took Tressel’s place.

There have been untold trials and tribulations since, including the early departure of junior quarterback Terrelle Pryor to the NFL, several other NCAA suspensions, critical injuries and a season (6-5, 3-4 Big Ten) that was destined to be a disaster in a city where football disasters aren’t readily accepted.

But along the way, during this emotional year and even before, Fickell has acquired many admirers.

His counterpart at No. 17 Michigan (9-2, 5-2), Brady Hoke, has known him for some time. He empathizes with what Fickell has had to go through.

“Well, it’s always tough. Luke is a guy who I have a lot respect for,” Hoke said this week. He also called Fickell and members of his staff “really good people.”

Fickell’s players seem to genuinely like him. Their loyalty isn’t feigned, nor is their desire to try to fix this last, difficult year by winning on Saturday.

Of course, the wins and losses are the bottom line. But some counsel there are other considerations.

“He was thrown into a very tough situation,” said Brewster. “There’s other parts to be judged as far as keeping us together like he has. And it’s been crazy coming up on 12 months — and we made it out in one piece. It wasn’t the season I imagined but the fact my buddies and I stayed together, I’ll remember that.”

Just like he has throughout the autumns for most of his adult life, Fickell is preparing for another Ohio State football game this Saturday.

He refuses to look back on the past few months for fear it might take away even a second he could spend trying to come up with anything he could do to make a difference in the game.

“I figure that after the season, when you have some time to actually relax a little bit and reflect, you’ll do that,” he said. “That doesn’t mean I haven’t taken notes on every situation and every decision that I’ve made, good or bad.”

“But to sit back and reflect on what it’s meant to me, that’s not what it’s about right now. It’s about Ohio State. It’s about Michigan. It’s about the greatest rivalry in all of sports.”

Linebacker Andrew Sweat said the world outside the locker room doesn’t understand how difficult it has all been for the Buckeyes. And that they couldn’t have gotten through it without some solid leadership from their head coach.