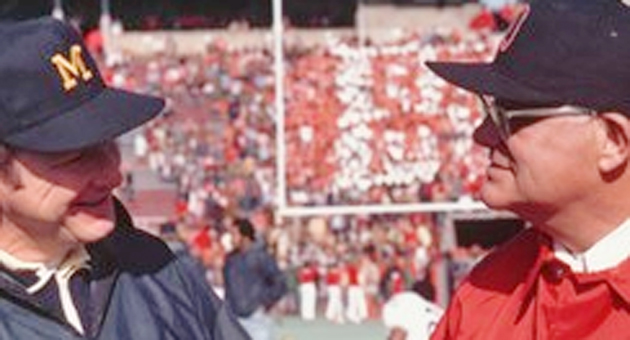 Legendary coaches Bo Schembechler (left) of Michigan and Woody Hayes (right) of Ohio State were instrumental in making the Ohio State-Michigan game a major rivalry. Both Hayes and Schembechler are deceased. (The Ironton Tribune / File Photo)

COLUMBUS — Being a favorite doesn’t mean much whenever Ohio State and Michigan meet.

The history of this heated rivalry is littered with upsets and surprises.

No. 17 Michigan (9-2, 5-2) is hoping to grab a share of the Big Ten’s Legends Division title on Saturday, and bolster its argument for a major bowl game. Ohio State (6-5, 3-4) has suffered through a difficult season shadowed by ominous NCAA sanctions, the loss of a 10-year head coach for breaking rules, injuries and more losses than any Buckeyes team in a decade.

In other words, don’t count out the Buckeyes, who are seven-point underdogs.

The unexpected has happened repeatedly in The Game’s storied 107 meetings.

Ohio State pounded Michigan 50-14 in 1968. It was late in that game, long after the outcome had been decided, when curmudgeonly Buckeyes coach Woody Hayes elected to try a 2-point conversion after a touchdown.

Asked later why he did it, he snarled: “Because I couldn’t go for three!”

While the Buckeyes racked up win after win the following season, things had changed at Michigan. A former Woody acolyte, Bo Schembechler, had taken over as coach. He pointed all season for the Buckeyes and his mentor.

Schembechler had signs placed all over Michigan’s practice field with that gruesome score. In the locker room, he put up another sign reading, “What the mind can conceive and believe, the mind can achieve. Those that stay will be Champions!” The players had to look at those words every day.

“We knew we were going to win even though we were 18-point underdogs against the best college football team ever assembled,” said Jim Brandstatter, then an offensive lineman for the Wolverines and now a radio voice for his alma mater’s games. “They hadn’t lost in two years, were coming off a national championship and were the consensus No. 1 team.”

By the time their season-ending clash came along, the Wolverines came in with two losses and Ohio State was riding a 22-game winning streak. By grinding out yards on the ground and pouncing on turnovers — Barry Pierson had three of Michigan’s six interceptions when the ground-oriented Buckeyes were forced to pass — the student’s team beat the teacher’s, 24-12.

At a dinner his former players had for him years later, Hayes got up to speak. Schembechler was in the audience.

“He looked down from the podium at me and said, ‘Damn you! You will never win a bigger game than that!”’ Schembechler said with a chuckle. “And he was right. I don’t think I ever did.”

A former Buckeyes player and another Hayes disciple, Bruce was not beloved by spoiled Ohio State fans who felt his 81-26-1 record just wasn’t good enough. But public sentiment shifted in the wake of his firing. And his players remain devoted to him.

The Buckeyes were just 5-4-1 when they arrived in enemy territory, still in shock.

Just before the kickoff, Bruce was standing on the sidelines and turned to say something to an assistant when he noticed out of the corner of his eye that his players were wearing white headbands.

“I was going to tell them to get those headbands off,” Bruce recalled. “When I looked at them, I saw that they said ‘Earle’ and then I thought I can’t very well tell them to take them off.”

The Buckeyes pulled off a 23-20 stunner, and Bruce went to the Michigan locker room after the game to say goodbye to his close friend, Schembechler.

Bo looked up at Bruce and said: “You know how I don’t like losing. But, somehow, today I don’t mind.”

In both 1995 and 1996, Ohio State rolled into the rivalry unbeaten, ranked No. 2 and on the verge of playing for a national championship. Michigan, with three losses already, had little to play for — except ruining the Buckeyes’ season.

Before the 1995 game, Ohio State wide receiver Terry Glenn said, “Michigan is nobody.” But the nobodies won 31-23 behind a virtual unknown named Tshimanga “Tim” Biakabutuka, who piled up 313 yards on 37 carries to outplay Buckeyes Heisman Trophy winner Eddie George.

A year later, Michigan was a heavy underdog again for The Game at Ohio Stadium. But a short pass to Michigan wide receiver Tai Streets on a slippery field turned into a long touchdown and the Wolverines pulled off another shocker, 13-9.

Is it really a rivalry if only one team wins all the time?

In the days before the game was always the last one on the schedule, Ohio State was 3-0 in 1919 and Michigan had won its first two games by a combined score of 60-0 against Case and Michigan Agricultural College (now Michigan State University). The Wolverines had not permitted the Buckeyes to score a point in the three previous meetings and had outscored Ohio State 369-21 in the lopsided series.

But Chic Harley, Ohio State’s first football star, changed all of that.

He scored on a 42-yard run for the game’s only touchdown, punted 10 times for a 40-yard average and intercepted four passes in a 13-3 Buckeyes triumph.

It was only the first of many surprises to come in The Game.