Herd wins to qualify for bowl 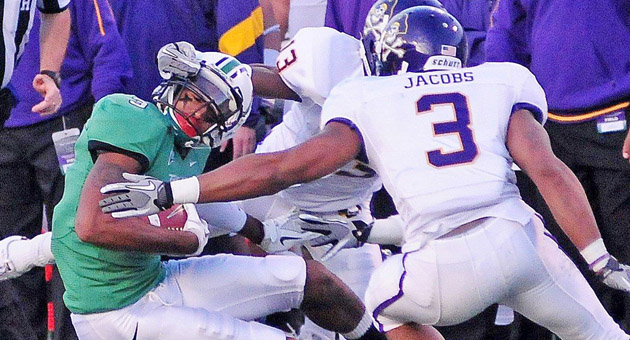 Dominique Davis was intercepted on East Carolina’s overtime possession, keeping the Pirates (5-7, 4-4) out of a bowl for the first time in six years.

Marshall had a chance with a win and a Southern Miss loss to advance to the conference championship game, but Southern Miss beat Memphis 44-7 Saturday.

Davis threw three touchdown passes to Justin Jones, including a 6-yarder with 14 seconds left in regulation to force overtime. Davis finished 32 of 48 for 285 yards.

Marshall got the ball first in overtime. Freshman Rakeem Cato threw a 24-yard pass to Van on first down to set up Martinez’s short scoring run.

On fourth-and-12 at the 27, Marshall’s Darryl Roberts intercepted Davis at the 10 to end the game.

Marshall’s Rashad Jackson intercepted Davis twice. One of them led to a Thundering Herd touchdown drive and the other came at the Marshall 23 to thwart an East Carolina scoring threat.

Cato, making his second straight start in place of the injured A.J. Graham, finished 23 of 29 for 341 yards and two touchdowns.

The teams combined for 24 points in the first quarter.

Davis then threw a pair of 3-yard TD tosses to Jones for a 14-10 lead. The second one came after Marshall’s Antavious Wilson fumbled the ball away at his own 32.

After Jackson intercepted Davis near midfield late in the second quarter, Dobson made a one-handed grab of a 13-yard pass for a score. Dobson caught four passes for 110 yards.

East Carolina’s Mike Barbour tied a school record with a 58-yard field goal as the clock ran out at halftime for a 20-17 lead. That tied the mark set by Jeff Heath against Texas-Arlington in 1982. Barbour also hit a 57-yarder midway through the second quarter.

Wilson fumbled the ball away again early in the fourth quarter after making a 53-yard catch to the East Carolina 3. The Pirates’ Brad Jacobs recovered the ball in the end zone for a touchback.

The Associated Press   CINCINNATI — Running back Cedric Benson needed only a few seconds to do the playoff math... read more