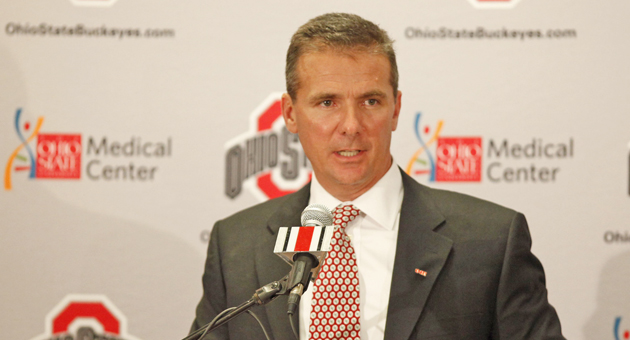 Urban Meyer was introduced Monday as the new head football coach of the Ohio State Buckeyes. Meyer guided Florida to a pair of national championships at Florida including a win in 2007 over the Buckeyes in the title game. (The Ironton Tribune / MCT Direct Photos)

COLUMBUS — If Ohio State did not come calling, Urban Meyer says he was planning to stay away from coaching for at least another year.

Meyer, the former Florida coach and native Buckeye, was officially hired Monday by Ohio State, a program with a glittering past that has suffered through a difficult year of NCAA violations.

“If not for the coaching position at Ohio State, I would not have coached this year,’ he said.

Meyer resigned as Gators coach after last season, citing health concerns and a desire to spend more time with his family.

“A year ago in my mind I was convinced I was done coaching,” he said.

He added that he is feeling great.

Meyer will become one of the highest paid coaches in college football, along with Alabama’s Nick Saban and Oklahoma’s Bob Stoops, and Texas’ Mack Brown. The school says he will receive a six-year contract that pays $4 million annually, plus another $2.4 million total in “retention payments.”

Interim coach Luke Fickell, who took over when Jim Tressel was forced out for breaking NCAA rules, will coach the Buckeyes (6-6) in their bowl game and be retained by Meyer as an assistant.

Meyer won two national championships in six years as the coach at Florida. Now, the 47-year-old will return to the place where his college coaching career began in 1986 after spending a year as an ESPN game analyst.

Earle Bruce, the head coach at Ohio State when Meyer was a graduate assistant, has remained a close friend and confidant of Meyer through the years. He said he had no concerns about Meyer’s health issues.

“Well, if he’d had a heart attack and his heart was bad, I’d be worried about that,” the 80-year-old Bruce said on Monday. “I’m not worried that he was stressed out over the game of football because he was thinking too much and not doing some things (exercising) that would have kept him straight. I think he got everything back under control by sitting out a year. I think he missed football. And he’s good at it.”

A team meeting set for Sunday night was moved to Monday afternoon before the news conference to allow Meyer to meet his players.

Alabama coach Nick Saban, who played at Kent State and coached at Toledo in the Buckeye state, said he was happy for Meyer.

“I’m sure he’s excited about it, and I’m excited for him that he has an opportunity to go back to his home state and be the head coach here,” Saban said. “I think it’s a wonderful opportunity and I think he’ll do a great job.”

Meyer takes over a program that is likely facing NCAA sanctions and was crippled by the forced resignation of Tressel. The Buckeyes completed their only season under Fickell with a 40-34 loss to Michigan on Saturday that snapped a seven-game winning streak to their rivals.

Wolverines coach Brady Hoke underplayed the role of the head coaches in the rivalry.

“I’ve known Urban, he’s a good football coach, a good guy and I welcome him in,” Hoke said on Monday. “But it’s still Michigan and Ohio and neither one of us is going to play the game.”

In 10 seasons as a head coach — two at Bowling Green, two at Utah and six at Florida — Meyer has a 104-23 record. His teams are 7-1 in bowl games, including the Gators’ 41-14 victory over unbeaten and top-ranked Ohio State in the 2007 Bowl Championship Series title game.

Meyer had persistently denied all the talk surrounding him and Ohio State. Soon after Tressel stepped down, Meyer said he wasn’t interested in leaving ESPN, where he was a college football analyst.

The chance to coach Ohio State changed his mind, he said.

“He enjoyed what he was doing, but I think he also had the bug to start coaching again,” ESPN broadcast partner and former Ohio State linebacker Chris Spielman said. “We just kind of talked about the pros and cons of both throughout the year. He weighed all the options and there were jobs out there that definitely captured his interest and certainly Ohio State was one of them. He decided that it was the best move. This was just an opportunity that he couldn’t pass up.”

Meyer inherits a program still facing NCAA sanctions. But he also inherits a young team led by a freshman quarterback, Braxton Miller, who would seem to be a perfect fit for his spread offense.

A native of Ashtabula, Ohio, Meyer becomes the 24th head coach at Ohio State. He succeeds Fickell, who took over last spring when Tressel’s 10-year reign came crashing down. Tressel was forced out for knowing but not telling his superiors that Buckeyes players had most likely broken NCAA rules by taking cash and free or discounted tattoos from the subject of a federal drug-trafficking investigation.

Missing several top players because of NCAA suspensions stemming from the tattoo mess, the Buckeyes were hit with more suspensions when three players accepted $200 in cash for attending a charity event and others were forced to sit out or had their existing suspensions extended for being overpaid for summer jobs.

The Buckeyes had already lost their string of six Big Ten titles when the school was forced to vacate the 2010 season for the NCAA violations. The school has also self-imposed two years of NCAA probation, offered to return $339,000 in bowl revenue from 2010 and to give up five scholarships over the next three seasons.

Ohio State is awaiting final word from the NCAA’s committee on infractions. The committee tagged Ohio State with a “failure to monitor” label — second only to a lack of institutional control on the list of most egregious charges against a university. The school could still be hit with a bowl ban, a loss of more scholarships, or other penalties.

Meyer, who spent two years playing minor-league baseball as a shortstop in the Atlanta Braves system, also served as an assistant at Illinois State, Colorado State and Notre Dame.

At the urging of Bruce, he took his first head coaching job at Bowling Green (2001-2002) where he led the Falcons to records of 8-3 and 9-3 before jumping to Utah. Using a spread offense featuring quarterback Alex Smith, the Utes went 10-2 in his first year. In 2004, he led Utah to an 11-0 season and a Bowl Championship Series berth — making the Utes the first team to ever qualify for a BCS bowl from a conference (the Mountain West) that was not an automatic qualifier. After a bowl win over Pittsburgh to cap the 12-0 season, he was the top candidate for the jobs at both Notre Dame and Florida. He surprised many by becoming a Gator.

In his second season with the Gators, No. 2-ranked Florida beat unbeaten Ohio State, coached by Tressel, 41-14 to win his first national title.

The next year Florida contended for a repeat, but after losing the SEC title game to Alabama, Meyer said he was retiring from coaching, citing health problems. He changed his mind and was back the next day, saying he would only take a leave of absence.

After the 2010 season, he stepped down again.