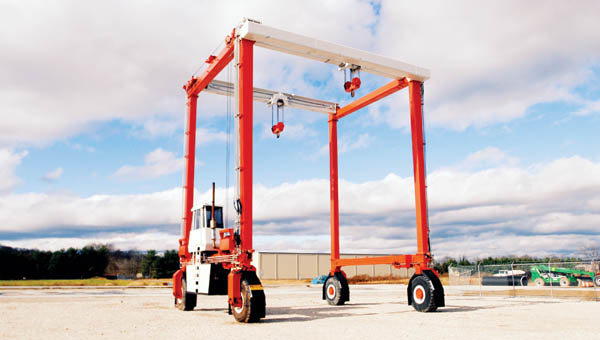 A gantry crane stands at the concrete pad at The Point industrial park in South Point. The crane is part of the intermodal facility being developed at the park.

SOUTH POINT — They call it a gantry crane, a funny-sounding name, but for those who push for economic progress for the county it is a vital part to turning that dream into reality.

So say those who have banked on making The Point industrial park into a hub for national and international product distribution via river, rail and road.

Last week the 32-foot-tall red and gray crane was erected in the heart of the industrial park. Now the next step is to find customers who want to use it.

For the past year officials with the Lawrence Economic Development Corp. have sought funding to make wide-scale renovations on parts of The Point with the single goal of creating an intermodal river port.

Work started when the State Controlling board approved a $9.5 million Logistics and Distribution Stimulus loan in the spring of 2010.

Then Dr. Bill Dingus, director of the LEDC, described the idea of the intermodal facility as a catalyst for the development of manufacturing since The Point is located where the Heartland Corridor meets the Ohio River.

“It will be a tremendous benefit to southern Ohio,” he said.

Jobs directly tied to the facility may range from 50 to 75, besides 45 temporary construction jobs.

Total cost for the river port has been estimated at $15 million. Of that cost $1 million comes from the LEDC and $3.2 million from federal funds, on top of the state loan. The state loan may be forgiven when the project is completed if it creates a specified number of jobs.

NASA first used the $185,000 gantry crane, made in 1992, now at The Point to move mirrors for the space shuttle program.

“It can lift 50 tons,” Clay said. “It is used to straddle a rail car and there is enough room for a truck to back under it as well. It can traverse product from rail to truck. It is really a versatile piece of equipment.”

The crane can also move up to six miles an hour carrying a 50-ton load. It is located on a concrete pad that is 176 by 450 feet with rail spurs running into it. That pad is still under construction, but is expected to be completed by February.

By March that part of the intermodal facility is expected to be up and running.

“Once we find users, she will be ready,” Clay said.

The tax liens on five delinquent parcels were purchased during a sale Monday morning at the county courthouse. Those liens... read more