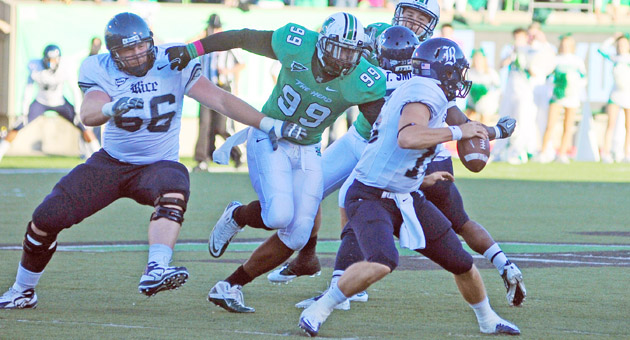 The final vote for the award, which is given annually to the nation’s best defensive end, will be concluded on Tuesday and the winner will be announced the following day.

His 48.0 career tackles for loss is also tops among all active FBS student-athletes while his 26.5 sacks rank him seventh.

The 6-foot-4 senior, who was also selected to the 2012 Senior Bowl, was named Bronko Nagurski National Defensive Player of the Week following his 4.0 TFL, 3.5 sack performance in the 24-20 Homecoming win over Rice on Oct. 15.

That award came on the heels of National Defensive Lineman of the Week honor by the College Football Performance Awards after his 4.5 tackle for loss, three sack day in the 26-20 win over Southern Miss on Sept. 10.

The senior captain from Neptune, N.J. also has 72 tackles on the season, one fumble recovery, three blocked extra points and one tackle for safety.

Playing the 12th-toughest schedule according to gberatings.com, Marshall finished 6-6 overall and won a program-record five Conference USA games this season against three defeats.

This year’s winner will be honored at the Hendricks Award Dinner in the spring of 2012 in Miami, Fla., Time and place are to be determined.