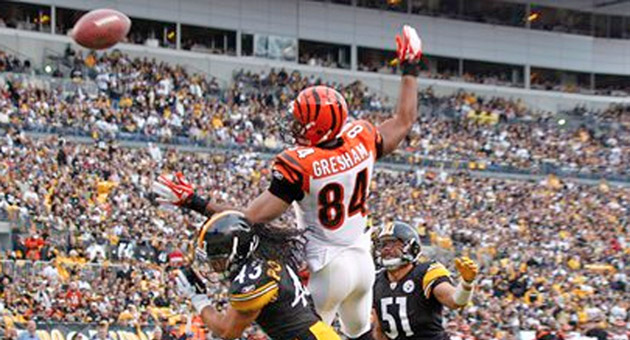 Cincinnati Bengals’ receiver Jermaine Gresham (84) is unable to make the catch as he goes up between Pittsburgh Steelers’ defenders Troy Polamalu (43) and James Farrior (51). (The Ironton Tribune / Courtesy of the Cincinnati Bengals)

PITTSBURGH (AP) — The Pittsburgh Steelers needed just 15 minutes to provide the Cincinnati Bengals a refresher course on what it takes to win in December.

Run the ball. Create turnovers. A big play or two on special teams helps. So does having a quarterback who knows what he’s doing when the games dwindle to a precious few.

It’s a formula the defending AFC champions have used for years. It has rarely looked as effective as it did in a 35-7 win Sunday.

“We’re in it now,” linebacker James Farrior said. “Right now is our time. … We already started our playoffs.”

It certainly looked like it as Pittsburgh (9-3) swept the season series from Cincinnati (7-5) for the second straight year to end any realistic hopes the Bengals have of winning the AFC North.

“It’s tough,” said Cincinnati wide receiver A.J. Green, who caught an 11-yard touchdown pass but also committed a false start penalty that wiped out another score. “We shot ourselves in the foot sometimes. Being the veteran team they are, they capitalized on everything we did.”

It’s what the Steelers do this time of year.

Pittsburgh has been a mixed bag at times this season, often playing to the level of the competition, regardless of who it is.

The same team that handled New England with ease six weeks ago is the same one that barely escaped woeful Kansas City with a win last Sunday night, raising concerns about Roethlisberger’s fractured right thumb, the running game and a defense nursing injuries to safety Troy Polamalu (concussion) and LaMarr Woodley (hamstring).

There were no anxious final moments against the Bengals. Pittsburgh’s best quarter of the season left little room for doubt, scoring four touchdowns in a span of less than 12 minutes to break it open.

“Finally,” Wallace said. “We always make it harder than it has to be. Today, we came out with a lot of emotion and a lot of energy. The guys just wanted to win. We knew what we had to do. It’s getting closer to the playoffs and it’s time for us to get better.”

While the Bengals appear to be getting worse.

Rookie quarterback Andy Dalton passed for just 135 yards, was sacked three times by Pittsburgh linebacker James Harrison and spent the fourth quarter on the bench as a preventative measure with the game out of reach.

Cincinnati coach Marvin Lewis did little to downplay the game’s importance, practically admitting his team’s hopes for an outside shot at a divisional title would all but disappear if his surprising team couldn’t earn a split with the Steelers.

The Bengals hung tough in a 24-17 loss to Pittsburgh three weeks ago, the kind of gritty performance that gave them hope they could earn a split with their division rivals and stay alive in their quest for a second division title in three seasons.

Thrust into the role of contender, the Bengals wilted in the spotlight, reverting back to the kind of mistakes they’ve avoided while rebuilding on the fly behind the tandem of Dalton and Green. Cincinnati committed 10 penalties for 109 yards and offered little resistance to lose for the third time in four games.

Roethlisberger, who aggravated his injured thumb in practice during the week, overcame a slow start to complete 15 of 23 passes for 176 yards and the two scores to Wallace. His final completion, a 9-yard toss to tight end David Johnson in the fourth quarter, was the 2,026th of his career, breaking Hall of Famer Terry Bradshaw’s club record.

It was that kind of day for Pittsburgh. Wide receiver Hines Ward became the 19th player in NFL history to eclipse 12,000 career yards while Harrison joined Chad Brown and Mike Merriweather as the only players in team history to record at least two three-sack games in the same season.

“You have to start playing good, all-around football,” Ward said. “Today, we displayed that.”

The Bengals did not.

Cincinnati’s miscues started early. Green flinched ever so slightly just before the snap to negate a 4-yard touchdown pass from Dalton to Jermaine Gresham on the Bengals’ opening possession.

Mike Nugent came out to kick a short field goal only to have it called back after being flagged for delay of game. Nugent’s kick never had a shot the second time around. Rookie Cam Heyward swatted it out of harm’s way to record Pittsburgh’s first blocked kick in more than two years.

It’s as close as the Bengals would get to making it interesting.

Mendenhall, who has been erratic, gave the Steelers the lead with a 3-yard touchdown run early in the second quarter. He upped the lead to 14-0 with a nifty 5-yard cutback run.

The Bengals continued to self-destruct on the ensuing kickoff when Brandon Tate fumbled and the Steelers recovered at the Cincinnati 23. Roethlisberger needed just three plays to hit Wallace for a 12-yard score to make it 21-0.

Dalton found Green for an 11-yard score to briefly give the Bengals life, but Antonio Brown extinguished any momentum with a scintillating 60-yard punt return just before the half that gave the Steelers a 28-7 lead at the break.

The Bengals came in with an NFL-record three double-digit second half rallies, but not this time. Playing with a lead Pittsburgh’s defense teed off on Dalton and sent fans sprinting to the exits early with victory in hand.

“It’s just embarrassing,” Cincinnati defensive back Chris Crocker said. “You don’t feel good at all. When they’re beating you so bad that their fans leave, that’s just a bad feeling.”

Notes: The Steelers have swept the Bengals seven times in the last 11 seasons. … Woodley started for the first time since getting hurt against New England on Oct. 30, but left in the first half after “tweaking” his left hamstring according to Tomlin. … Pittsburgh hosts Cleveland on Thursday night, while the Bengals host Houston on Sunday.